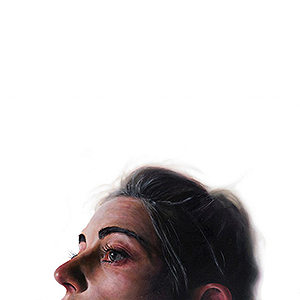 On view in the Thinkspace project room is Slaying Idols, featuring new works by
Los Angeles-based artist Drew Merritt. Known for his hyperreal rendering and darkly stylized
painting aesthetic, Merritt creates sparse works set against nondescript areas of negative white
space. Primarily figurative in focus, Merritt’s pieces rely on intense shadow and regions of
lightlessness to create a feeling of dramatic contrast.
A talented painter and muralist who began his art career as a graffiti artist, Merritt’s
compositions often convey a level of human discomfort or unease through figures staged in
contorted poses or through imagery posited through slightly distorted vantage points to impress
a feeling of visual tension. Often capturing vulnerable or mysterious moments in some larger
narrative arc, his works feel ambiguous and poetically saturated. Hoping that his work speaks
for itself, Merritt resists the tendency towards excessive explication, preferring that it resonate
with the viewer directly unmediated in its delivery.