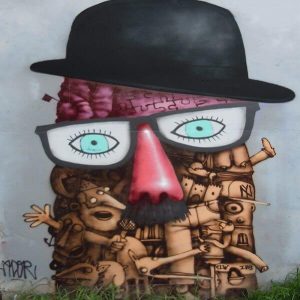 Ador is a young French graffiti artist, born in Nantes. He studied arts and grew up in the northwest of France. As a teenager, he started tagging and drawing, together with other graffiti writers.

In 2005, he painted a mural in the neighborhood where he lived. Ten years later he is painting his art throughout the world, from Montreal to Shanghai.

Current and Previous Works by Ador