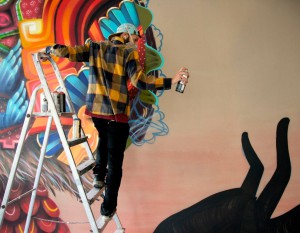 Curiot is a painter and street artist working in Mexico City. He earned his B.F.A from the Universidad Michoacana de S.N. Hidalgo in 2008. His paintings have been exhibited in diverse solo and group venues including Fecal Face, Anno Domini, Fifty24MX, CC186, Centro Cultural Border, Galeria David Alfaro Siqueiros, Lavamp, La Cream Galeria, and received an award for his work ‘Mass Media’ in the 7th National Biennial of Painting and Engraving Alfredo Zalce. Curiot’s work has been featured in numerous online and print publications including Beautiful Decay, Indie Rocks, El Fanzine, and Tongue Mag. Curiot’s colorful paintings, featuring mythical half-animal half-human figures and scenes, which allude to Mexican traditions (geometric designs, Day of the Dead styles, myths and legends, tribal elements), are rendered in precise detail with a mixture of highly vibrant yet complementary colors. ‘Growing up in the States sort of gave me a diluted Mexican culture, I had no clue what I was missing out on until I moved back 10 years ago’, says Curiot. ‘The bright colors, folklore, ancient cultures and the beautiful handcrafts are some of the things that I embraced and which influence my work deeply’.

Current and Previous Works by Curiot