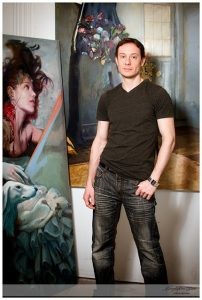 Daniel Bilodeau’s painting and mixed media works bring abstraction and detailed realism together in a fresh and unified whole. Art historical references are paired with image deconstruction and occasional collaged material such as textiles or string. Individual works touch on post-modern life, consumerism and identity. Producing monumental scale works as well as tiny miniatures, Bilodeau blends passages both smooth and textured, graphic and naturalistic in his dynamic painting style.

Born in Montréal, Canada, Daniel Bilodeau received his BFA from the Ringling College of Art and Design and his MFA from the New York Academy of Art in 2013. He also studied at Studio Art Centers International in Florence, Italy. His work has been exhibited in the U.S. and abroad in museums such as the Fort Wayne Museum of Art and the Mesa Contemporary Arts Museum, and in art galleries primarily in New York City and Los Angeles. He is the recipient of several honors, including the George Sugarman Foundation Grant and the Leslie T. and Frances U Posey Foundation Scholarship. The Terra Foundation of American Art recently awarded Bilodeau a summer residency in Giverny, France. His work is also to be found in The Figure: Painting, Drawing and Sculpture, a survey of the use of the figure in contemporary art, published by Rizzoli Press. Bilodeau’s work is to have increased exposure in Asia, where exhibition and curatorial projects are underway for Hong Kong, Seoul, and Tokyo.