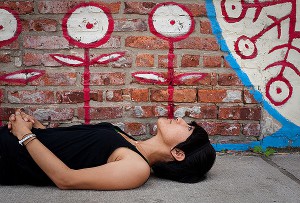 Fumi Nakamura is a New York City based street artist, illustrator and designer. Originally from Shimizu, Japan, her family moved to California when she was 12. Her intense and sometimes eerie graphite and coloured pencil artworks have been featured in exhibitions around the world.

Growing up in Japan around mountains and the ocean, nature heavily influenced what would develop into a Fumi Nakamura’s very distinct style. Human figures, feathered and toothed creatures, skulls, birds and abstractly altered animals with multiple heads or eyes form a mixture of natural and imaginary elements which make her sometimes grim looking art visually intriguing. Besides the obvious naturalistic influence, Nakamura’s work is a reflection of her mental state. Extracting heavy thoughts and emotions into her art is her way of staying mentally balanced. Nakamura holds a BFA of Pictorial Arts degree from San Jose State University.