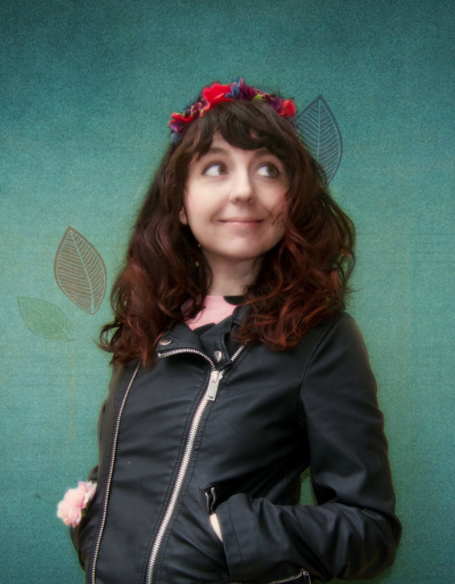 BIOGRAPHY
She was born on January 2, 1975 in Valencia,…
… just when Franco’s dictatorship was in its final stage. Her parents were activists of the anti-fascist movement, defenders of liberties and social justice, an aspect that has had a great influence on their way of understanding life and also art.

Being still very young, the family leaves the city, looking for a different way of life, and moves to the countryside. Surrounded by nature, her love for animals begins. Her house becomes a refuge for abandoned animals. There she lives with dogs, cats, rabbits, geese, chickens, ducks, hamsters … As she is an only daughter and without other children to play with, she would collect fallen sparrows from the ground and walk snails, play with the frogs and feed ants.

This little girl with an extremely timid character finds when reading, a world to submerge in. She reads with passion all kinds of books that she finds in the home library; but it will be fantasy and science fiction the literary genre that she would fall in love with.

Fine Arts at the Polytechnic University of Valencia

Leaving behind her childhood ideas of studying zoology, she starts studying Fine Arts at the Polytechnic University of Valencia, a place where she would never feel at ease. She could not find within conceptual art and dominant abstraction a space for sad girls with big eyes. It was during this time that she discovered the work of the feminist anthropologist Marcela Lagarde. After attending several of her workshops, she became aware of what feminism means, not only in the public but also in the private sphere. The gender perspective would change her personal life, her relationship with herself and with others, and is key to understanding her work.

The last years of her career were spent outside of Spain. Two scholarships took her to the Czech Republic and Mexico. Each country for different reasons would make deep impressions on her life. It was a period of great experimentation; vital and emotional, artistic and political. In Prague, the anti-globalization movement, in Mexico, the Zapatista indigenous caravan. It was then part of the Malvhada Team, clearly feminist orientated, where they looked for new modes of expression, making installations in the exhibition space with painting styles merging to give meaning and coherence to the work, beyond the mere artistic object.

“Russafa”
Upon her return to Spain she works painting pictures in a series for decoration companies that she signs under different pseudonyms, her personal universe begins to take shape. After going through different studios, she finally settled in Ruzafa, a downtown multicultural and bohemian neighborhood of Valencia. Her little girls who are nobody and don’t have anyone have become princesses who do not want to be princesses. And in this way the contradiction that lives inside them is also reflected in the work of Olga Esther. A work that combines the childhood yearnings of princess tales with the rebellion that this provokes.

Currently she is dedicated exclusively to her painting. And although she maintains the studio in Ruzafa, she has returned to the countryside. She lives in a small yellow house in the mountains, surrounded by birds and squirrels, with her life companion and her two dogs, Frijol and Buffy.