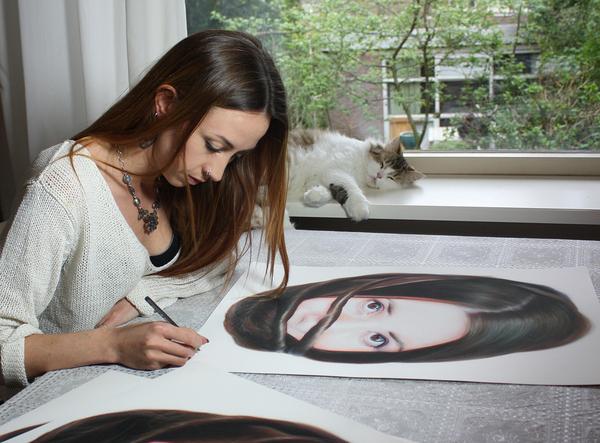 Roos van der Vliet (b. 1985) is a Dutch artist, based in Arnhem, the Netherlands. She got her BFA in 2009, and has been painting ever since. Her work has been exhibited throughout Europe and the USA. Although she doesn’t consider herself a hyperrealist, she does get lost in the details every time she paints. She wants to get so close to the reality she’s presenting, that it almost feels real. The eyes must look back, hair must look like it’s touchable. It has something to do with the feeling of alienation she gets when looking at the world around her. Life is so enigmatic, and by watching it from close up, reproducing that reality, it seems to give her more control over it. Like when she’s creating something real, it makes her more real.

Roos is merely known for her ‘Storyteller’ portraits in which women stare through the confines of their hair with a striking gaze. By letting these portraits speak to the viewer in a non-verbal language, their piercing eyes almost force the viewer to stand still and look back.

In Roos van der Vliet’s new work for ‘The Space between’ she explores human insignificance in the grand scheme of the vast universe. Her hyper-detailed portraits and still lifes with human hair ask the observer to both forgo their personal frame of mind and get lost in detail, as well as surrender to a profound feeling of melancholia. The tranquil hair paintings, disembodied from the faces we saw in her earlier ‘Storytellers’ work, can be considered as modern day still lifes. This lifeless matter we so thoughtlessly discard in our own lives is given a new meaning. The work asks the viewer to ponder the meaning of individuality, beauty and transiency.