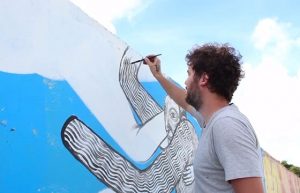 Inquire about
Troy Lovegates (aka OTHER)
Country Canada

Troy Lovegates, once known as Other, began to make his presence known in the North American boxcar pool. Working with conventional oil bars used by previous generations, Troy applied not only black or white when he drew, but used both to create distorted, well-rendered characters. What made Troy’s work really stand out was the textured faces achieved by shading using only his fingers. Inspired by the rails, they are unlike anything else. As Troy remarks, “Trains are amazing like that. All that work and history just fades into oblivion. It is hearsay. Bonfire tales and great stories off into the night air.” – Austin McManus via Juxtapoz https://www.juxtapoz.com/news/magazine/troy-lovegates-like-there-is-no-other/

Current and Previous Works by Troy Lovegates (aka OTHER)