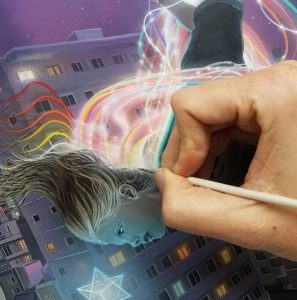 Phoenix-born painter Wiley Wallace’s work is playful and ambiguous, his luminous and ostensibly radioactive worlds suggest a metaphysical interest in the possibility of alternate realities: the endlessly shapeshifting and protean nature of fantasy at the intersection of the imagined and “real.” Wallace’s paintings combine realistic rendering with elements of the surreal, and near-magical references that include eerily cast light sources bordering on the supernatural. Playful and macabre, his works combine intense thematic contrasts between light and dark to achieve suspense and evasion. Children are a recurring theme in his compositions, representing a kind of primordial link to something invisible and beyond comprehension, exempt from the rationalizations of the adult. Often using his own children as models, Wallace’s narratives are open-ended, filled with suggestion and partial disclosures rather than forceful assertions or posited certainties. The themes of connection and communication resonate throughout Wallace’s imagery, as the works’ protagonists seem ever in search of fugitive contact. The skeleton is a recurring figure throughout Wallace’s imagery as well, appearing at times as a sinister harbinger of some kind and at others as Halloween costume level kitsch. Wallace’s pieces convey a kind of sci-fi nostalgia harkening back to a Spielberg-era of extraterrestrial-themed filmmaking. At times their implied innocence and naiveté give way to darker and more dystopian readings, surfacing amidst the neon-hued glow.