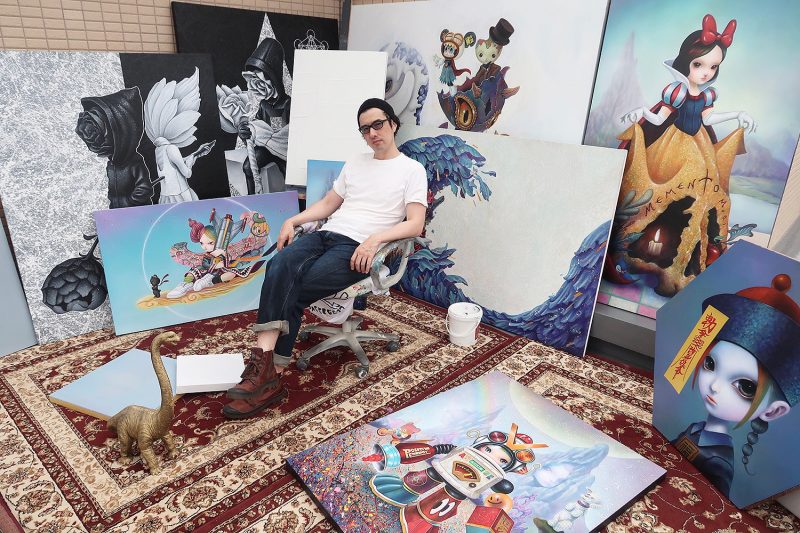 Started to create original characters and draw them since early childhood, and learned his way to paint by himself.

The first solo show was held in Yamaguchi when he was sixteen, 1994.

Known as Spaceegg77, and shows works in Asia, the U.S, and Europe, living in Tokyo.

Also known as a specialist of symbolism and innocence. Sometimes four colors like red, green, yellow, and blue appear in his works. These colors represent the four bases of DNA: adenine, thymine, guanine and cytosine, that is, A, T, G and C-molecular elements that all animate beings share. Yosuke paints these colors and A, T, G and C with a message that all animate beings should have equal worth.

The theme of Yosuke Ueno’s art is “Love, Space and Positive Energy.”

And the following is my important policy to create.

“I always start new work without any detailed designs. My hope is for a piece to complete itself beyond my imagination. I sometimes say that artists are parallel to scientists. Scientists have no way of knowing the result of an experiment beforehand. The same can be said about creating art. It is no wonder then that brains and instruments of thought are another prominent symbol. My belief is that though brains may be restricted in terms of size and quantity, they are wondrous in that the possibilities are limitless. It is the most supreme belonging a human being can possess. Our brains decide the behavior, character and personality of each individual, denoting the utmost depths of our identity.”

The 11th March, 2011, Great Earthquake and Tsunami attacked east Japan and the accident in the nuclear reactor in Fukushima had followed the catastrophes. The date 311 had been an unforgettable day for all the people live in Japan and Japan has had a great trauma. In fact, I have created many works derive from these events. Our daily life had to totally be changed since that day. I could not almost believe that I am living the same world where we had lived before 311. Every people in Japan distinguish our life as before 311 and ‘after 311.” I remember well that I had been faced at blank canvases, trembling from great fear at those days. But that quake had brought a specific shape to my art that had had some obscure illusions. So I have been expressing my experiences “after 311” from various aspects.