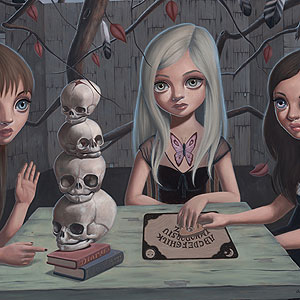 There Is Time To Kill Today

From the Press Release:
‘There Is Time To Kill Today’ will showcase new paintings, drawings and the debut of a new series of charcoal works on canvas from artist Ana Bagayan.

Ana Bagayan was born in the Armenian capital of Yerevan. She studied painting at Art Center College of Design in Pasadena, California. Her work explores images of adolescence as metaphors for larger themes of ethos and wonder and has been featured in such publications as Rollingstone, Spin, GQ and various others. She currently lives and works in Burbank, California.

Ana talks a lil’ about the show… “Although theres no unifying theme to this show, the inspiration for the work comes from the metaphysical- ghosts, spirits, intergalactic space creatures, anything that hints at the idea that we are just a small part of the unimaginably vast universe. Some of the works are based on hypnosis sessions of people who believed they had been abducted by aliens. I’ve created human/alien hybrid creatures based on the experiences
these people described. All of the works, I feel incorporate the inherent beauty of interpreting both the known and unknown.”