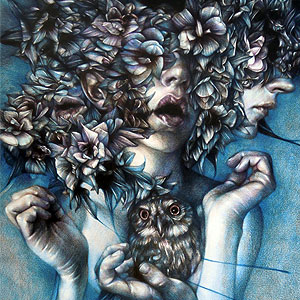 Thinkspace (Los Angeles) presents Immune, the gallery’s first solo exhibition of works by Italian artist Marco Mazzoni. A graduate of the Brera Academy of Fine Arts in Milan, Mazzoni has established himself internationally with his unique mastery of dry media. Using a medium often derided for its lack of sophistication, Mazzoni creates superbly detailed works with only colored pencils; drawings made with Faber Castells that could rival the painted chiaroscuro techniques of the old masters. Increasingly lauded worldwide for the transformative finesse of his style and the haunting tenor of his imagery, Mazzoni’s hypnotic works unveil an ornate sensibility fraught with terror and beauty.

Inspired by ancient Sardinian folklore and its oral traditions of storytelling, Mazzoni’s symbolic imagery began with an interest in Sardinia’s matriarchal culture, specifically its tradition of female herbalists and healers from the 16th to 18th Centuries. A history recounted and preserved through these endemic forms of narrative, the feminine occupied a privileged and feared place in the cultural imaginary, synonymous with both healing and malediction. These oppositions continue to fascinate Mazzoni and influence his imagery. The female figures in his works, always anonymous and symbolic rather than specific, are swathed and shrouded by an encyclopedic abundance of flora and fauna: tendrils descend, wings protrude, flowers drip and bleed from mouths. At once sybaritic and vaguely abject, these feminine figures emerge and recede in varying states of parasitic bondage or rising eminence. Overwhelmed by flowers and birds, they are darkly apparitions that remind us, in all their terrifying beauty, of the sublime hostility of nature and its mercurial threat of change and transformation. The works seem to border on chaos, but artfully return to a measure of balance and equilibrium.

Mazzoni’s ability to convey palpable gradations of light and dark, the tactility of texture and weight, and the viscera of depth and flesh, owes a great debt to his mastery of materials. The artist’s unique pencil technique involves the painstaking application of several underdrawings to achieve painterly accretions of color and depth. With each subsequent addition or layer, Mazzoni applies an entire veil of color overall to attain the inky obscurity of his blacks and the vibrant opacity of his colors, creating thick sediments of pigment. In keeping with classical European training methods, Mazzoni has also undertaken the meticulous study of moody chiaroscuro and tenebrism techniques from the likes of Ribera and Goya, replicating works and by these historical masters to emulate their command of extreme contrasts. Mazzoni’s works embody a deep respect for technique that truly animates his shadowy world of beauty and discomfort. These drawings breathe, palpitate and hum with a darkly sensibility. As sensual as they are anxiety inducing, these works are like living ancients hovering in some long lost recess of time.

Immune will feature several new works by the artist, including a series of his moleskine animal drawings. Exploring the ageless themes of loss, transformation, memory, and mourning, Mazzoni’s imagery continues to delve into a wealth of natural symbolism, conjuring endless permutations of change. While evoking these themes from ancient cultural narratives, the artist reminds us of their continued human resonance. In Mazzoni’s words, it is the constancy of pain that ensures our immunity to it and our eventual return to balance: “human beings need to move forward, and the endurance of pain makes you grow, ultimately allowing you to be immune.” Fittingly, in Immune the sublime proximity of beauty and pain is undeniable.