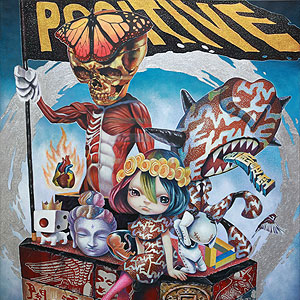 Thinkspace (Los Angeles) – is pleased to present Beautiful Noise, the gallery’s fourth solo exhibition for Japanese artist Yosuke Ueno. A self-taught painter, Ueno has been creating fantastic worlds and characters as long as he can remember. Highly stylized and beautifully imaginative, his works are surreal and emotional; an alternate reality expressed through a quasi-mythological orbit of his own making. Like tightly knit universes unto themselves, his bizarre and wonderfully unhinged worlds feature a recurring cast of characters and repeated motifs. An intensely emotive painter who, by his own admission, allows his cathartic approach to dictate the development of his works as they’re made, Ueno’s take on pop surrealism is at times explosive and at others meditative, but is consistently seeking the reconciliation of darkness and whimsy.

Inspired by Japanese graphic cultures such as manga and anime, and drawing on the unique stylization of Japanese street fashion, Ueno’s graphic paintings are galvanized by his love of visual culture. Channeling both anger and optimism in the creation of his creatures and surreal landscapes, he seeks the transformation of the negative by invoking hope and positivity through his imagery, even when it betrays trauma and distress in equal parts. Ueno approaches painting as a communicative conduit, and as something powerfully invested with the capacity to make people feel. Because of this implicit responsibility, he has actively sought love and redemption in his imagery rather than indulging in destruction and sadness. Painting is a process of discovery for Ueno, one that he likens to scientific experimentation and unknown variables. He allows his paintings to evolve intuitively, not knowing what the end result will be.

His interest in striking a balance between light and dark imagery is immediately apparent in some of his more recent works. These manage to reconcile the suggestion of sweetness and innocence with the presence of something more sinister and foreboding. Wide-eyed, plushy, rainbow-colored characters are offset by skulls and abject anatomical references, and cotton candy landscapes are punctuated by the suggestion of something harder and menacing, or deeply melancholic. Despite a recurring invocation of love and hope that verges at times on a plea, the works clearly convey the coexistence of often irreconcilable oppositions. Ueno has spoken openly about how his work and imagery were greatly affected by the earthquake, and resulting Tsunami, that devastated Japan in 2011; an event that has left an indelible trauma on its culture. His work, following this tragedy, became less about his omission of negativity, and more about his attempt to summon love and hope in its midst.

The multiplicity of characters in Ueno’s works, and there are over a thousand, hails from the artist’s connection to Japanese Shinto; the polytheistic spiritual tradition in Japan that reveres the greatness in all small things in nature, and seeks the presence of the divine in the minute. In this belief system, there are millions of individual god figures, a veritable plethora of characters and personified energies for even the smallest of natural elements. Each individual part is as important as the whole. This spiritual pluralism is woven throughout Ueno’s work, as the artist builds complex symbolic systems, holistic worlds and recurring metaphors to reinvent a personal spiritual iconography.

Yosuke Ueno’s works, though beautiful, contemporary and graphic, are loaded with a symbolism that betrays the artist’s deeper spiritual connection to making. Giving his imagination free rein to create on impulse, Ueno builds a surreal cosmos with infinite possibilities.