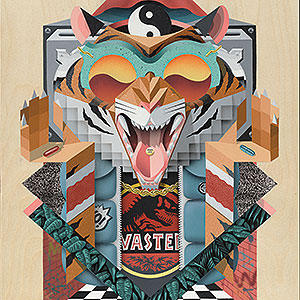 Opening Reception with the Artist(s): Saturday, June 20, 2015 6:00pm - 9:00pm
If you have any questions or would like to purchase any of the works below, please send an email to contact(at)thinkspaceprojects.com.
For more information regarding purchases, shipping and payment methods, please click here.

Thinkspace (Los Angeles) – is pleased to present Wasted Youth, the first LA based solo exhibition of works by sibling artist duo Low Bros. Based in Berlin, and originally from Hamburg, the Low Bros consists of brothers Christoph and Florin Schmidt, formerly known by their aliases Qbrk and Nerd. Their murals and street art collaborations have transformed urban landscapes around the world, punctuating streets and accenting structures with a host of memorable and hyper-stylized characters. The Low Bros have developed an urban mythology with a cast of recurring characters and fictional crews, brought to life by a visual shorthand that is unmistakably their own. Drawing from 80’s and 90’s skateboard, graffiti and hip hop cultures, the brothers appropriate imagery from the graphic histories that defined their youth, and transform nostalgia into something entirely fresh and innovative.

Combining elements from the animal and human worlds, the Low Bros fuse urban references with those taken from nature. Their animal characters, ranging from tigers and cheetahs to “teen wolves”, are subcultural emblems or hyper-stylized stereotypes. As stand-ins for the human, this anthropomorphic animal world is mischievous and whimsical, while also jarring and unexpected in its juxtapositions. Graphically deconstructed and reassembled as an amalgam of strangely wonderful surreal worlds, the man-made collides with a hallucinatory animal kingdom that mimics its conventions and affects. Incorporating elements of psychedelia, West Coast skate culture, early video games and 80’s and 90’s graphic design – all brought to life with a tongue-in-cheek machismo – the Low Bros create pieces that are undeniably irreverent and playful.

The work is distinctly geometric, as though structurally composited from individual blocks or planes of color, and hovers somewhere between cubist cut-out, graffiti script and 16/32-bit atari graphics. These meticulously faceted pieces spare no attention to detail, while the intense color combinations and shading bring it all to life. The Low Bros are constantly setting up visual tensions between two-dimensional and three-dimensional optics, channeling a simultaneity of perspectives. Oscillating between flatness and dimension, some areas feel static and hard-edged while others are fluid and organic. The clever composition of these effective contrasts results in an unexpected richness of spatial depth and plasticity.

Self-taught graffiti writers, the brothers work primarily in acrylic paints and aerosols. In addition to their site-specific murals, individual panels and prints, they have also made recent forays into video and installation, bringing their motley cast of urban animals to life. The Wasted Youth exhibition will coincide with a large public project in Los Angeles, their first, and will include a large site-specific gallery mural and an installation component. Though their work is so clearly inspired by Californian youth and pop culture, the Low Bros are visiting LA for the first time on the occasion of the exhibition. An ironic nod to their mother’s admonishing cautions that graffiti was “a waste of their youth”, the Low Bros exhibition title embodies their penchant for irony, humor and, above all else, audacious play.