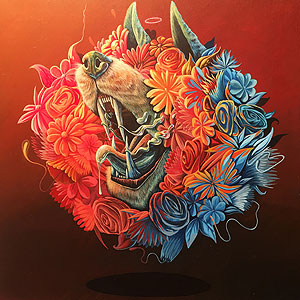 Thinkspace (Los Angeles) – is pleased to present Along Infinite River, featuring new works by Philadelphia based artist Yis Goodwin. An imaginative painter, illustrator and urban muralist known for his work’s unrestrained creativity, Goodwin, or “Nosego”, brings detailed totemic pieces to life. Rich with symbolic suggestion, personal excavation and uninhibited play, his character driven works host countless creature composites, their parts assembled from the fluid intermingling of imaginary worlds. A process inspired by his childhood memory of recombining elements from the characters in his toy box, Nosego creates new forms from borrowed individual parts. Weaving in and out of multiple worlds and references, he combines surreal cartoonish mutations with elements of detailed realism. The resulting bionic universe is made up of anthropomorphic animals, fractured and reassembled figures and spaces, and a child-like nostalgia offset by something darker lurking in adult shadows.

When not creating huge architecturally scaled murals with spray paint, Nosego is working primarily in acrylic on wood panel. Uniting reality with fiction through an intuitive stream of consciousness, he captures his free associations, in defiance of plausible relationships, and playfully allows the works to come to life. A floating wolf head emerges from an orb of flowers, a mountainous expanse is glimpsed through the open mouth of a duck head, a cartoon-like cat emerges high above a forest as a waterfall cascades from its mouth…There are no limits in Nosego’s world and everything is connected. The animals become relatable symbolic vehicles for human impulses and expressions, while the landscapes combine everything from forests to galactic skies.

Nosego’s work conveys something far more profound than inventive “Frankensteining”. It’s personal and explosively emotive. His wonderfully offbeat hybrids of animals, objects and environments are always dynamically evolving; sloughing off and building up new parts and skins before our eyes, revealing a simultaneity of multiple, actively changing, selves. Though an artist who encourages his work to be freely interpreted by the viewer, the idea of capturing a feeling of psychological interconnectedness and continuity is apparent in the work. Movement is literal and figurative, and nothing is static or remains still. Nosego’s work is always shedding layers and pushing new propositions through its newly opened spaces, puzzling together a legion of disparate pieces, places, bodies and selves. Along Infinite River is inspired by this fluidity of consciousness, so integral to Nosego’s process, and by the deeply interconnected nature of life as a journey coming in and out of present and introspective focus.

There is a childlike joy in the way Nosego creates his work; the kind of honest enthusiasm for creation that is so quickly consumed by the cynicism of adulthood. He captures this indiscriminate creative impulse, commingling play with the dark, ridiculous and uncanny….the end result is nothing short of spellbinding.