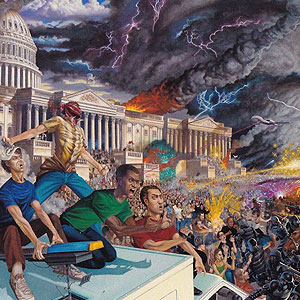 MEAR ONE: COGNITIVE DISSONANCE
Thinkspace and C.A.V.E. Gallery are honored to be showcasing the powerful new work from Los Angeles’ west coast king of graffiti, MEAR ONE, at this year’s fifth and final installment of Beyond Eden, a multi-gallery event celebrating the

New Contemporary art movement. In Cognitive Dissonance MEAR ONE explodes back onto the scene with a thought-provoking narrative series of large oils and acrylics, recently described by the SF WEEKLY as the “blood diamonds of pop-surrealism” and by fans as the “Robert Williams of Graffiti.”
In Cognitive Dissonance MEAR ONE claims neither fact nor fiction; rather, here, he merely lays the groundwork for thoughts and queries worthy of conversation to build. Through a dialectical method of sorts, his work questions the standard taught model of mankind’s origins, postulating that we are all part of a much longer historical identity that has been kept from our knowing – Why? By whom? To what end? – is one side of the story he aims to relate. Like many thinkers before him, MEAR ONE believes that the collective unconscious already knows the soul of humanity, that we were once part of an ancient global society connected to a higher order and purpose, and works from the simple premise that a single paradigm shift in thinking has the revolutionary potential to change the order in everything, the end result being sublimation.

“My work tackles subject matter that transcends the mundanity and mindlessness of our ruledworld predicated upon a falsified past. As a result, mankind has been thrust unknowingly into a state of Cognitive Dissonance; humanity has been under soma, asleep for generations. Upon awaking, it will be the instinct of many to react to these truths in a very deep and visceral way, challenging some of our fundamental beliefs about what is and isn’t our shared, lived reality. Gaining intellectual independence from the dominant ideology can go some way towards overcoming this dissonance.”

Frantz Fanon’s interpretation of this psychological human condition, and for which the show is titled after, lends itself to a particular strand of liberation theory that resonates with the artist’s own “inner conscious rebellion” birthed from his beginning’s as one of the West Coast’s most prolific graffiti writers. Throughout the 80s and 90s, MEAR ONE gained recognition for pioneering the Melrose Alleyways. He was the first graffiti artist to exhibit at the 0-1 gallery, then dominating the Low Brow art scene, gradually evolving his conceptual practice into something more in line with today’s emerging New Contemporary movement where he encounters the same energy and freedom of the streets to cultivate a style all his own.

MEAR ONE’s work was part of the landmark Art in the Streets 2011 exhibit at the Los Angeles Museum of Contemporary Art, Street Cred at the Pasadena Museum of California Art, and Last Thursday at the Orlando Museum of Fine Art. His artworks reside in the permanent collection of the Laguna Fine Art Museum as well as numerous private collections at home and abroad. He is perhaps best known for constructing powerful narratives juxtaposing philosophy, ancient mythology and modern politics to inspire an evolved consciousness. MEAR ONE helps us envision the sublime spirit of our time – not by escaping reality, but by confronting it head on.