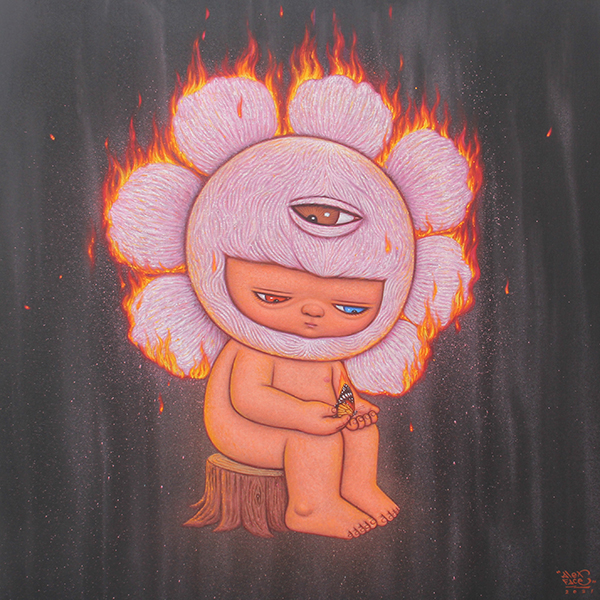 Scorch and Drop (Gallery I)

His signature subject, a quizzical smoking baby that shares a moniker with the artist himself, can be seen contemplating the future. With a worried look spread across its face, this baby turns an eye to the world around it, an extension of Alex Face’s identity as an artist with a social conscience.

Ultimately, this moment became the catalyst for the character he is widely known for. The baby, with its third eye to represent another dimension beyond what we can plainly see, takes on new situations and future possibilities in this new collection of work.

Patcharapol Tangruen (aka Alex Face / b. 1981) is a well-known and influential graffiti artist in Thailand. Alex studied architecture at Bangkok’s King Mongktut Institute of Technology and earned a Bachelor’s Degree in the Department of Fine and Applied Arts. An interest in architecture led Alex Face to explore and wander the streets and back alleys of Bangkok for abandoned buildings, sites that he eventually used as a canvas to develop his street art.

Using Alex Face as his alter ego, the artist attempts to create a link with the urban population, the underprivileged of Bangkok and the surrounding provinces. His iconic character showcases the adventures of a disillusioned child in a baby rabbit costume who looks wise beyond his years, at first glance appearing cute, but all the time worrying about the future of our world.

Fire burning on the wings of hope
fragile petals on our heads,
glowing and blazing
we’re at the peak of our blissful life,
moving the thinnest part of our own body,
fluttering, aware of power and weakness
we scorch and drop,
as fire slowly burns our body and soul
we try our best
and most things appeared as they should
we’re on fire!!!
growing exponentially, moving freely
expressing our vision, angriness, kindness,
love and hate
we are shining and moving with power
until everything turns dark,
and another kind of creature
children of ours
will appear with their new light of day
yeah, we scorch and drop as we should