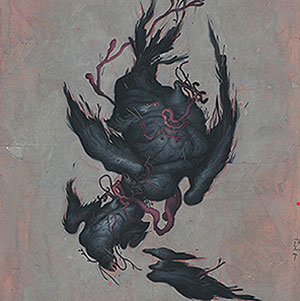 Opening Reception with the Artist(s): Saturday, September 17, 2016 6:00 - 9:00pm
If you have any questions or would like to purchase any of the works below, please send an email to contact(at)thinkspaceprojects.com.
For more information regarding purchases, shipping and payment methods, please click here.

(Los Angeles) – Thinkspace is pleased to present Bruxism, a solo exhibition of new works by Brooklyn-based artist Allison Sommers. In her sixth exhibition with the gallery, Sommers presents new mixed-media works that veer increasingly towards an expressionistic abstraction of the figurative. Known for her imaginative and irreverent worlds of creature curiosities and disobedient bodies, Sommers conveys an irrepressible disquiet through an undoing and upended capsizing of skins. Anatomically impressionistic, and at times barbaric, her renderings of bodies and humanoid animals appear in a state of troubling excess, rupturing through the flawed boundaries of their outsides. She presents us with a nightmarish vision of embodiment, reminding us of the body’s impermanence and mortal failure while revealing the uncomfortable beauty of the abhorrent.

Sommers’ vaguely apocalyptic world is aesthetically fraught and anxiety ridden. Simultaneously gestural and painstakingly contained, a sustained tension emerges between the loose and the drawn, the chaotic and the controlled. Evocative and symbolically open-ended, her imagery evolves through exhaustive sketchbooks and the wrought work of constant mark making. Though familiar, her creatures are at far enough of a remove from the real to evade heavy-handed horror. The surreal proportions of the grotesque keep the imagery on another, more poetically licentious, plane. Seductive and simultaneously pained, Sommers’ world of viscera loosely intermingles violence with calm, the sacred with the profane, and the hideous with the alluring. The brutality of the flesh is an unavoidable precondition of the self, in both its violence and vulnerability, a theme that continues to seep from her work.

Sommers describes her process as one of frenetic distillation, a constant consumption and extraction of experience and influence. Working across a variety of media, she creates installation and sculptural-based works from found materials and altered remnants alongside her two-dimensional pieces. Starting from sketchbook drawings, Sommers builds her paintings through the accretion of marks and materials, layering drawing in various media such as graphite, copier pencil, wax crayon, china marker, magic marker, ballpoint pen and fountain pen, and interspersing these with layers of gouache, her preferred painting medium.

A former history major fascinated by 18th,19th and early 20th, Century historical and cultural themes, Sommers’ work has become decreasingly narrative-based over the years in favor of a more interpretative exploration of its various inheritances. She is interested in what she has called the “scale of grief” in the interwar period, a legacy of existential distress explored by the likes of Francis Bacon, George Grosz, and Otto Dix, all of whom she identifies as influences. Sommers invokes this dissociative experience of the body as a philosophically fractured, psychically incohesive, and ultimately disjointed vessel for the self. Though she dissuades an overly prescribed interpretation of her work, preferring to keep it loosely associative, Sommers’ references and allusions are complex and nuanced.

Among the themes explored by Sommers in Bruxism are the consuming compulsions and wasting momentums of anxiety, the repetitive and forced nature of nostalgia, and the imperfect and unresolved nature of embodiment. In keeping with her preference for references that function as thematic “scaffolding,” her title refers to “bruxing” the term given to the compulsive grinding of a horse’s teeth.