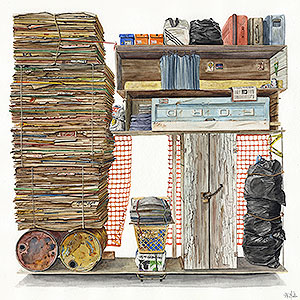 Alvaro Naddeo is from São Paulo, Brazil, at 30 years old he started to move around, he lived in Lima, New York City, Tampa and currently in Los Angeles. All these urban environments shaped his memory and permeate most of his work. From an early age, he fell in love with painting with his illustrator father as a role model, but because of a lack of self confidence, he left the brush aside and pursued a career in advertising as an Art Director, 20 years later, while living in New York City and being exposed to its many contrasts, his desire to pick up the brushes intensified and he came back to painting with full intensity.

The subject matter of his work is waste, overconsumption and social inequality. Trash and objects found in the street are valuable, and not only for aesthetic reasons. The brands, logos and packaging depicted in his work are objects with an inherent duality, both desirable and despicable, a clear byproduct of having worked in advertising for all those years.