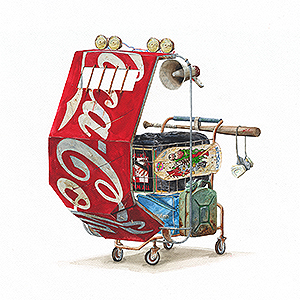 Thinkspace is pleased to present IndigNation, featuring new works by Brazilian born and Los Angeles-based artist Alvaro Naddeo. Interested in the study of castaway objects and the subtle graphic nuances of urban detritus gleaned from the city sphere, the artist combines its textures and edges in compositional amalgams. His interest in the life of the unassuming object extends to billboards and signage, cast away containers and boxes, and domestic and industrial spaces, conjoined and superimposed in unexpected mashups, or cultural relics that speak of use and disposal in the contemporary city. Working primarily in watercolor on paper, Naddeo achieves an impressive level of hyperrealistic rendering, bestowing unexpected poetry to the lowly remnants of the city’s waste and urban recesses. Naddeo’s works offer a commentary on the excessive momentums of contemporary consumerism, while his imagery explores the decay and deterioration of the city-worn.

Naddeo is originally from São Paulo, Brazil and has also lived in Lima, Peru and New York City and currently. These urban environments have helped to shape the artist’s memory and permeate most of his work. The artist is partly self-taught and partly homeschooled. His father is an illustrator, and as a child Alvaro would spend many hours drawing and watching him work. His father was a constant source of inspiration and encouragement, but having an artist as your father also proved frustrating at times. At 17, Alvaro compared his work to his and thought that his own drawings and paintings were not good enough. so he quit. Naddeo went on to pursue a career in advertising as an Art Director, something that still allowed him to exercise his interest in art, but without requiring mastery with the pencil or brush. 20 years later, while living in New York City and being exposed to its many contrasts, Naddeo’s desire to pick up the brushes intensified. He is now a full-time artist, exhibiting his works around the world.

“The subject matter of my work is waste, overconsumption and social inequality. Trash and objects found in the street are valuable, and not only for aesthetic reasons. The brands, logos and packaging depicted in my work are objects with an inherent duality, both desirable and despicable, a clear byproduct of having worked in advertising for more than 20 years.”
– Alvaro Naddeo