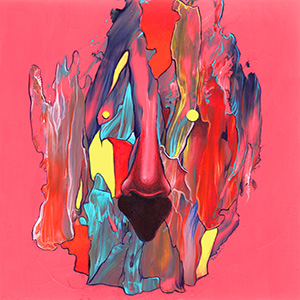 Anthony Hurd was born is Kansas City, Missouri and raised on skateboard culture. As the weird gay kid who made his own clothes, cut his and his friends hair, painted all night after skating all day, and played bass in hardcore straightedge bands, he knew all too well that he needed to get out on his own and create his own path.

His art career would start a couple of decades later, after years spent in the entertainment industry doing advertising and subsequently doing freelance work for years following that. The freelance jobs allowed Hurd to get back into painting and explore his creative process again. A series of tragedies; the passing of his little sister, the end of his 18 year relationship and various hard truths that came to that end, shook his foundation and tore apart his identity, allowing him the opportunity to start a new.

With vulnerability and compassion for himself and others, he’s been able to put a voice to previously unspoken moments. Constantly influenced and inspired by skateboard and music culture to this day, and the perspective of being a queer step dad, Hurd has created his own space to tell his stories.

This new series of works for “Current Mood” started during the pre-Covid19 quarantine. The original painting that inspired this direction was based on an experience the artist had as a child. He would have this recurring event, from about the age of 7 to 15, where he would wake up and see what looked to be like an indigenous mask sticking out from under my bed in various locations, watching me sleep, when he would awake and see it, the mask would vanish before his eyes or disappear under his bed. Hurd’s mother instilled fear in him, through her religious beliefs, that this was the work of Satan and that he needed to pray for his soul. His mother’s efforts of fear won him over and he spent many years worried about the reappearance of the masks and their meaning.

Recently, Hurd has started doing some soul searching and really forcing himself to face his hidden fears, and in doing so, set out to create a version of these masks / protectors from his childhood. The practice has evolved into endless explorations that have taken on many new meanings. These masks continue to take on new meaning, as our political climate continues to spiral, racial struggles come to the forefront, the LGBTQIA community have their rights stripped away, and the resulting fear that can be witnessed in people the world over. The masks act as the skin under our skin, a shield for our ever changing moods and emotions. They are a shield to help us face to the world evolving around us. “Current Mood” aims to set the tone of America at large. The good, the bad, and the indifferent. It’s a face we can each relate to a different way.