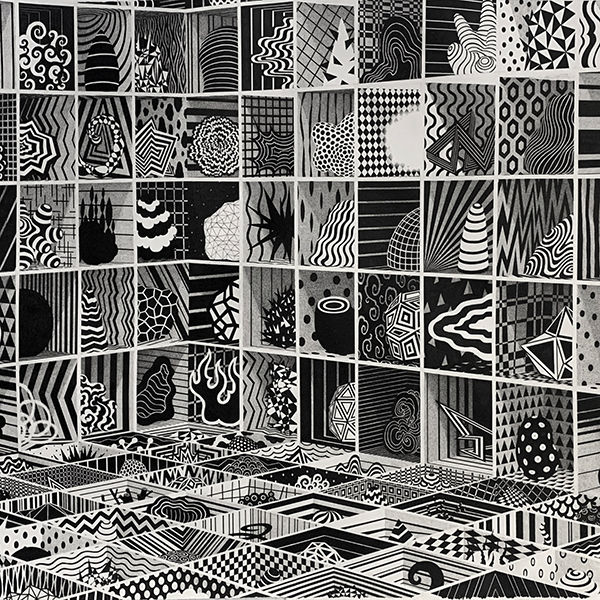 True to their commitment to the New Contemporary Art community, Thinkspace Projects rings in the holidays with an exciting lineup of December shows, fun-filled opening night, and a toy drive. With their beautiful expanded space filled with art, they are thrilled to celebrate this milestone year.

Thinkspace Projects is thrilled to present Ben Tolman’s Unmode. Known for his carefully detailed, architecture based drawings often pointing to social issues, Tolman uses this exhibition to turn his focus inward, examining his creative process directly. Tolman found that the idea of complexity is closely related to creativity. Complexity can be described as a process by which two or more preexisting things are combined to create something new that could not have been previously predicted from the starting point. Creativity can be described the same way with the added element of intent or preference. Drawing on this comparison, he uses a study of black and white two-dimensional shapes to explore the possibilities of creativity.

This show will kick off with an opening and holiday party featuring DJs Venice Beats, an open bar, free drinks from Liquid Death, Live Painting from Brek as part of ‘Courtyard Sessions’ curated by GoopMassta, Tamales from The Roll ‘N Bun, a Vape bar from Timeless, and Video Projections from Digital Debris. In the holiday spirit, the THINKSPACE TOY DRIVE will be happening all evening! Bring a new wrapped toy and Thinkspace will be giving out books, sticker / button packs and more to all that bring by a toy for a child in need. All toys will be donated to the local Salvation Army Community Corps and then be distributed to underserved children in Southern California, in tandem with Toys for Tots. For those who need to do a bit of their own shopping, GoopMassta will be curating a small artist mart perfect for last minute gift purchases and treating one’s self.

Open December 3rd with a reception from 6PM to 10PM. They will remain on view until December 31st at Thinkspace Projects.