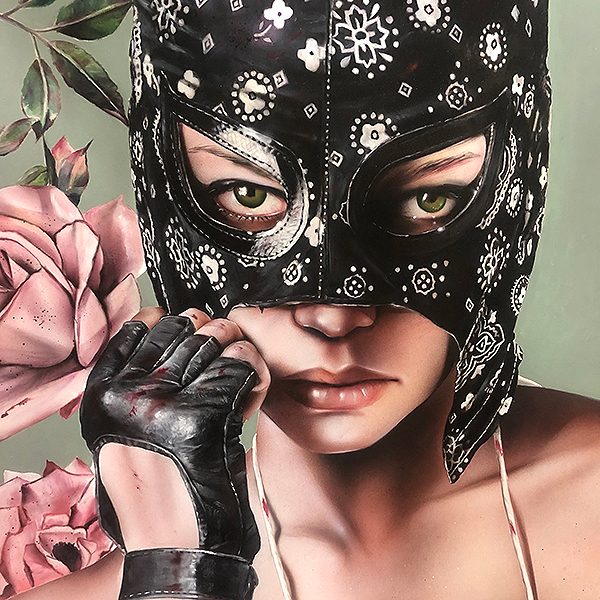 FREE poster commemorating ‘MANIA‘ given away to the first 200 patrons through the doors!

Just in time for a Halloween celebration, Thinkspace Projects is thrilled to present Brian Viveros’s MANIA. The CA-based artist best known for his highly detailed paintings of anti-pin-up doe-eyed ‘Woman of Power’ and his Dirtyland universe, brings an entirely new body of work to the gallery.

For his 7th show with the gallery, Viveros brings his biggest collection yet, with over 25 new pieces. Featuring the beautiful and yet barbarous subjects he is known for, each piece draws from the power of the feminine and its reconciliation of vulnerability, beauty, and power. His subjects are fighters and survivors, they are the heroes standing tall, rendered immaculately, and just bloodied enough to remind us that they are formidable opponents not to be taken lightly. Viveros’ work elevates the iconography of the femme-fatale as a powerful emblem of strength and retaliation: insubordinate beauties undaunted by the unruliness of a messy fight.

MANIA is a tribute show, it’s a personal show, and it’s a bit of a journey taking viewers back in time to the things Viveros obsessed over as a kid, the things that ultimately drove the MANIA inside of him. This body of work is a challenge and a true progression for the artist pushing him outside his comfort zone into breathtaking new territory, not only in theme in scale, size, color palette, techniques and even mediums like watercolors, gouache, and spray paint.

Thus far, his work has been about letting the viewer tell the story. With MANIA he reclaims the narrator role, taking viewers on a very

“MANIA is the Battle Royal of everything that changed my life. Paying homage and tribute to such influences and heroes like Batman, Superman, KISS, Nirvana, The early days of skating and the Bones Brigade, Bruce Lee & Quintin Tarantino, Conan the Barbarian, Excalibur, Cobra Kai, Wonder Woman, Lucha Libre, Wrestlemania, David Bowie, Star Wars, Boxing and more!”

The MANIA collection represents many notable firsts including his largest ‘Matador’ piece to date entitled ‘Solid Gold.’ His largest full-bodied Evillast entitled ‘In this Corner’ is also present in this collection, packed with detail using much more vibrant colors and patterns. The ‘Dirtyland,’ one of his most iconic characters, returns on a large scale more powerful than ever, with the return of spray paint elements in Viveros’s work.

About the artist…
Brian M. Viveros is a CA based artist, best known for his highly detailed paintings of his anti-pin-up doe-eyed ‘Woman of Power’ and his Dirtyland universe. Viveros’ recognition and exposure was catalyzed by his participation in a major group exhibition in Switzerland in 1997 entitled: The Art of Porn, in which he exhibited alongside celebrated artist and academy award winner H.R. Giger. Since then, Viveros’ work has been widely exhibited in North America and Europe and has been published in many books and magazines. Brian also had his first art book published in 2015 entitled ‘The Dirtyland: The Art of Brian M. Viveros’ published by Thinkspace Editions.