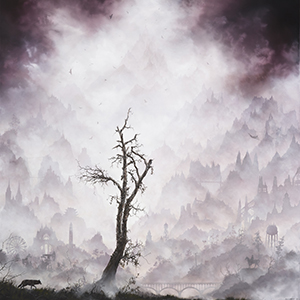 Opening Reception with the Artist(s): Saturday, April 7, 2018 6:00pm - 9:00pm
If you have any questions or would like to purchase any of the works below, please send an email to contact(at)thinkspaceprojects.com.
For more information regarding purchases, shipping and payment methods, please click here.

Thinkspace (Los Angeles) – is pleased to present new works by North Carolina-based painter Brian Mashburn in his main gallery debut, Origin Stories. The artist’s meticulously detailed works depict quasi-post-apocalyptic scenes in which the natural and human worlds coexist uncomfortably, the remnants of human industrial development haunting the perimeter of the landscapes it has exploited to stage its expansion. Human beings are conspicuously absent from these works but loom invisibly in architectural vestiges, abandoned monuments, and other harbingers of imperfect progress. In this new body of work, Mashburn’s imagery continues to explore his interest in the natural sciences, canonical philosophy, and history, incorporating subtle references to studied and observed themes. Looking to both the cultural and personal narratives that shape our sense of belonging and ancestry, Mashburn offers a nuanced rumination on the poetic power, and fallibility, of antecedents.
Mashburn’s landscapes conjure elements of a 19th-Century Gothic romanticism, offset by contemporary hyperrealistic rendering and surreal contextual juxtapositions. The worlds he posits are densely clouded, overburdened with skeletal trees, and heavy with fog, while anchored by baneful mountain edges and dramatic craggy peaks. These stylistic mainstays of Mashburn’s landscapes are exaggerated and unspecific; like malefic augurs, they cling to something vaguely familiar but petition enough strangeness to elicit phobic dread. Barren and full, the works prophesize a state of exhausted depletion, where nature’s resilience and the effects of unchecked human hubris stand still in an uneasy moment of detente.

The fog-laden vistas for which Mashburn is known are inspired by both the Appalachian Smokey Mountains of Asheville North Carolina, where the artist resides, and his extensive travels throughout the densely overpopulated and polluted areas of Southeastern China where the atmospheric cast is thick with smog. Inspired by his American-Asian heritage, Mashburn incorporates loose stylistic references to historical Chinese ink wash painting, crediting his meticulous work ethic to early scholastic experiences in Chinese character classes. An aggregate of nebulous influences, his works are drawn from this personal heritage, daily observations, an interest in critical theory, and the recent ubiquity of ominous politics and doomsday news. His dystopian landscapes border on the allegorical and suggest a post-cultural world in which eroded edges have failed to contain the entropic threat of chaos.

Technically impressive, Mashburn’s works are composed and minutely detailed. Obsessed with the optics of close proximity, the works hold tight even when examined with little to no distance, unlike more gestural styles that tend to loosen when viewed up close. Working on several pieces in tandem at any given time, the artist achieves the density and surface quality through the application of multiple layers of oil, each sediment dried before the accretion of the next. Expertly controlled, the works are held together by this burden of detail, an ironic counterpoint to the thematic deterioration they capture.

In an era of rampant and environmentally untenable growth – one that attests to a profusion of consumption and use that now seems in overt defiance of any over worn and anachronistic ideal of ‘progress’ – Mashburn’s Origin Stories looks to the source of beginnings from the vantage point of ends.