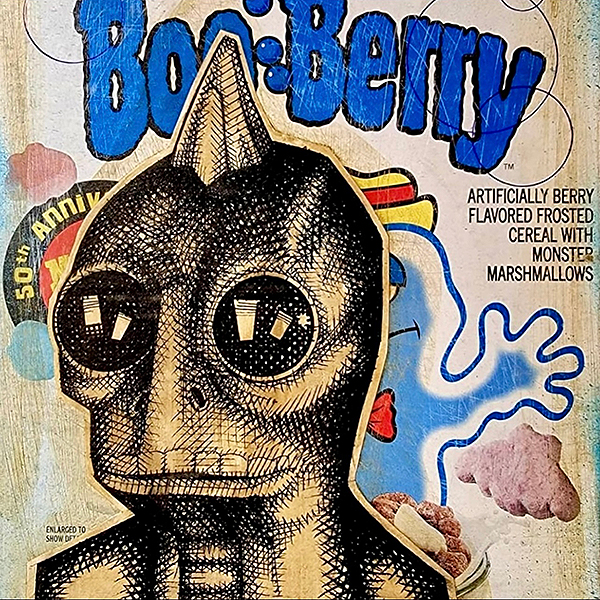 Carlos Ramirez was born in 1967 in the Coachella Valley (California) where he is currently based. He was formerly part of the artist collaboration The Date Farmers with Armando Lerma for over a decade. The duo’s work was exhibited in museums such as Oakland Museum of California, Laguna Art Museum and Palm Springs Art Museum. The Date Farmers began working independently in 2017 and ever since Ramirez has been blazing a trail with his detail drenched, mixed media works that echo his Mexican-American heritage rooted in California pop culture. Ramirez’s paintings, collages and three-dimensional sculptures contain elements influenced by graffiti, Mexican street murals, traditional revolutionary posters, sign painting, prison art and tattoos.

With traces of ancient indigenous art, mushrooms, and mescal, Ramirez combines familiar pop iconography and corporate logos with figures from comics, folklore and Catholicism. Desert creatures such as coyotes, snakes, and scorpions appear frequently in his works as well as found materials like stamps, bottle caps, hand painted or collaged lettering. Through his unique perspective as an American-born Chicano, Ramirez explores topical subjects with a profound simplicity.