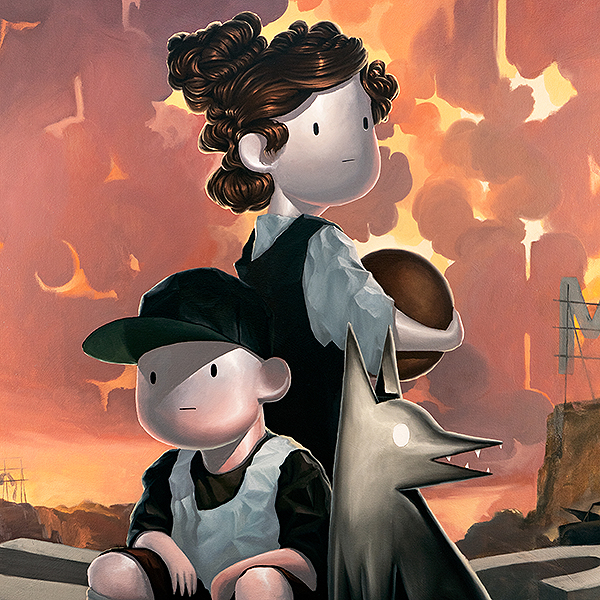 The Mesa Contemporary Arts Museum and Thinkspace Projects are proud to present:

Dark Matter explores the invisible forces behind the decisions we make and the narratives we create. The dark matter hypothesis proposes that 85% of all matter in the universe is unseen. Astronomers have observed that galaxies seemingly do not have enough mass to account for the gravitational forces needed to hold them together in clusters. However, there is evidence of a nearly undetectable, or “dark” matter that generates binding forces in the universe while remaining a complete mystery.

In their new body of work, the artist duo Giorgiko play with the idea that a significant percentage of our lives may be made of a different “dark matter”, one of untold stories, hidden agendas, and powerful feelings; which plays an equally significant force on our lives and our relationships with others. With so much unknown, what is perceived with the senses may only reveal a part of the story. Through seven oil paintings and 13 special edition sculptures, Giorgiko invites viewers to consider what we really know, what we don’t, and the mystery that holds us all together when, theoretically, we should be flying apart.

About the artists:
Giorgiko (pronounced jee-OR-jee-koh) is the product of a collaborative experiment between Darren and Trisha Inouye melding minimal, expressive character illustration with large-scale classical painting. Conceived in 2012, the Giorgiko universe is home to lost boys and wayfaring girls, and explores the stories of their wanderings and their dreams of being found again. Urban and classical youth are portrayed in city and nature scenes as part of their journeys through the world.

The husband-and-wife team first met while studying art at ArtCenter College of Design in Pasadena, California. Darren was attracted to Trisha’s authenticity and quirkiness, while Trisha was drawn to Darren’s dashingly good looks. Trisha hails from a Korean immigrant family in the San Francisco Bay area and was noticed at an early age for her talent in drawing. She brings a cuteness and sweet innocence to Giorgiko’s characters. Meanwhile, Darren is a 4th generation Japanese- American from Los Angeles who fell in love with hip hop dancing and graffiti in his youth, and the underground influence is evident throughout the Giorgiko universe. Darren and Trisha’s work blends street and cute to create relatable images for wanderers of all ages.

Darren and Trisha are parents to identical twin boys who keep the young artists occupied with finger foods and baby babble. Their greatest accomplishment to date is keeping their children alive.