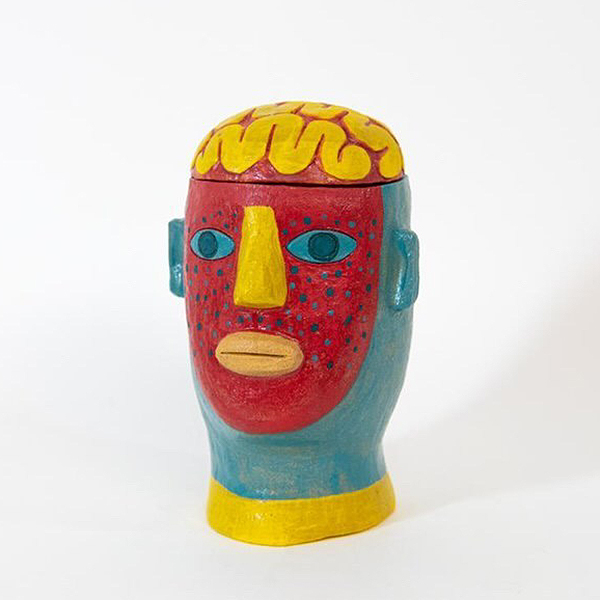 David Shillinglaw is a UK based artist, best known for his works exploring human nature, success and failure, and the language people use to describe their experiences. David’s practice shifts between the street and studio using a variety of materials and mediums creating work that ranges from drawings and collages to large scale murals and installations. Shillinglaw lives and works in Margate, UK.

Dream Machine is a series of works on canvas, paper and ceramics by David Shillinglaw, presenting the human head as a vessel full of dreams, a flesh machine in constant flux.

These paintings and sculptures play with the human form. Shillinglaw invites you to find yourself or someone you know in these twisted and colourful characters. Part hieroglyphic beast, part comic book hero, the works pop with humour and naive charm. A mix of modern and ancient, the sensitive and brutal, the personal and universal.

“As an artist, David wrestles with this equilibrium of order and disorder. He has returned numerous times to the Carl Jung quote: “In all chaos there is a cosmos, in all disorder a secret order.” His works speak of our all-consuming journey to figure out some form of neat structure. But they also suggest that we will never fully understand the world around us, and that is where the real meaning lies.

These works confront the restrictive framework that is often applied to human life, leading to rigid definitions of gender, personality type and identity. David’s portraits pull away the calm and singular facades that many people walk around with and return the human to its innately complicated, beautiful self. These portraits do away with the binaries typically used to understand humanity and offer a more open-minded, compassionate view. These figures are allowed to be exactly as they are, jumbled but whole.”

-Emily Steer (extract from the introduction to Relax, The Universe Is Expanding)