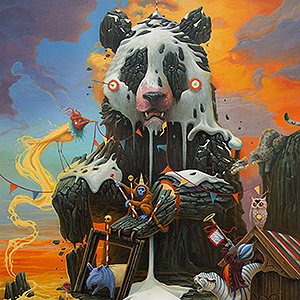 (Los Angeles, CA) – Thinkspace is pleased to present new paintings and drawings by Spanish painter, illustrator, and muralist Dulk in Legacy, the artist’s second solo exhibition with the gallery. Based in Valencia, Spain, Antonio Segura Donat, known internationally by the Dulk pseudonym, creates worlds of stylized Animalia and character creatures, striking an unlikely balance between the playful ease of children’s make-believe and the prescient threat of ecological doomsday. As surreal as they are foreboding, Dulk’s works celebrate the beauty of nature’s biodiversity while simultaneously mourning the imminence of its loss. Much in the same way that fantasy actively invites collusion with nightmare, Dulk’s extravagantly lush imagination, for all of its seductive warmth, is punctuated by premonitory distress, and poignantly aberrant, if not predictive, details. A Baroque naturalist, Dulk’s imaginative animal morphologies combine nature and metaphor, biology and dream, to produce beautifully foreboding results.

Dulk’s encyclopedic penchant for detail was nurtured early on; his father raised birds for enjoyment, and Donat grew up surrounded by wildlife, books, and encyclopedias, studying the subtleties and variants of animal etiologies and sketching them. He now travels extensively worldwide to research and source exotic specimens for his own works, combining the biologist’s impulse to catalog with the surrealist’s love of creative chaos. The specificity of Dulk’s imagery rivals that of a miniaturist’s, with hidden vignettes, characters, subplots, and gems peppered throughout his tightly composed images. Inspired by everything from contemporary illustration and graphics, graffiti and public muralism, to the early twentieth-century surrealists and the perverse genius of Medieval Netherlandish artist Hieronymus Bosch, Dulk’s world is as expansive and elated as it is heartbreaking and wounded.

Donat’s environmental advocacy, though not the primary impetus for his work, is built into the pathos it undeniably conveys. Animals are anthropomorphized by human affect, often presented as fractured, disjointed, restrained, hollowed, or inhabited. Relationships are parasitical and superimposed, mimicking the free-associative realm of dream with hybrid composites and bizarre, imagined physical ecosystems. Little Memento Mori style reminders of death and impermanence are cast throughout alongside other recurring symbolic gestures, like little skulls, tiny cloaked harbingers with glowing eyes, hollowed animal chests lit by tiny inhabitants, random concentric targets and fugitive arrows, dissolving landscapes, melting bears, petrified skins like tree bark or geological sediment all threatening to crack, and inexplicably spliced, levitating bodies. The potential horror of the content, however, is mitigated by the playful beauty of its delivery.

In Legacy, Dulk presents an ominous carnival, a brightly hued universe of ecological disasters and totemic portents. Though aspects of the grotesque darken them, the worlds Dulk stages are governed by an imaginative innocence and a desire to unify rather than to divide. The most innocent appeal to love of all, the heart, appears throughout his imagery amidst the implicit violence of the skulls, the targets, and the arrows. A philosophic onism lurks in the multiplicity and infinite interconnectedness imagined by Dulk, a world of artistic albeit absurd biologies that urge us to take heed before it is too late.