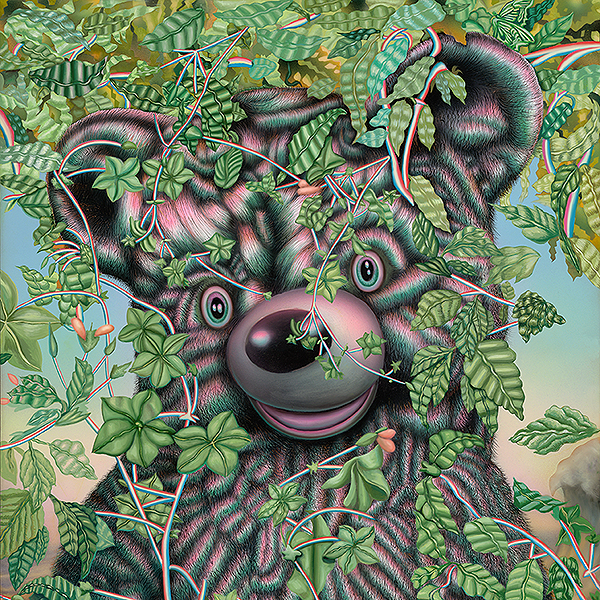 Thinkspace Projects is pleased to present Erik Mark Sandberg’s latest solo show Golden Pacific. Following a run of successful group exhibitions together, the gallery is thrilled to host their debut solo exhibition with the local LA artist. This will be Sandberg’s ninth solo exhibition overall and first in almost four years.Golden Pacific consists of six paintings, four etchings, and two monoprints, each offering an idealized sunset-bathed surreality. The uncanny nature of the paintings allows for ambiguity within the pictorial codes loosely themed around daily recreational activities, love in the modern age, or the ersatz reality of the digital realm.“I am interested in suggestions and the transaction between the environment and the individual. The sky color gradations in this body of work speak to a momentary idealism evoking pause, much like the shared impulse to photograph a slow-moving sunset. This new series of paintings also employed an increased level of detail and craft, which was an ideological choice to express the nuanced figurative portrayals in relation to the influences that govern them.”The show itself depicts a process, featuring the etchings that were the preliminary drawing for three of the featured paintings. This is a unique window into Sandberg’s painting process, which he has not previously shared. Illustrating the differences between the beginning drawing state and the finished painting state, he adds a layer of depth and transparency to the show.

About Erik Mark Sandberg
Erik Mark Sandberg was born in Minneapolis, Minnesota, and attended Art Center College of Design, receiving a B.F.A with distinction in 2002. His body of work ranges from an experimental mix of painting, printmaking, photography, sculpture, and video. Since 2002, Sandberg’s work and projects have been exhibited at galleries and museums nationally and internationally. Including the solo exhibitions Atwater at Det Nya Museet, Stockholm, Sweden (2017), Interlude at Stephanie Chefas Projects, Portland, Oregon (2018), The New Pretty, RMIT University Residency Exhibition, Melbourne, Australia (2011), Get Pretty Now, Jonathan Levine Gallery, New York, NY (2011). Before becoming an assistant professor of art at California State University Northridge in 2018, Sandberg has lectured at Otis College of Art and Design, Art Center College of Design, and Pacific Northwest College of Art.