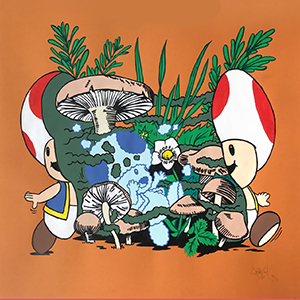 English, Paris-based illustrator and artist Ermsy takes the popular cartoons of his childhood and reimagines them as irreverent appropriations. Fascinated by American pop culture as a readily accessible, visual vernacular, Ermsy’s take on its beloved illustrated characters is both satirical and participatory. These adult-themed bastardizations of Garfield, Loony Tunes, The Simpsons, and the like, are simultaneously elated and anarchic in their absurd display of debauchery like tendencies.

Using familiar characters provides Ermsy with a set of pre-established imaginative boundaries within which to work. Like a hot-boxed descent into an alternate universe of nostalgic psychotropic Saturday morning cartoons, his world is a playful subversion of familiar, pop cultural fodder.

“I love pop culture,” Ermsy explains, “and I love exploring it.” His graphic exploration of pop culture uses popular cartoons in the same way that graffiti writers use letters. “Using well-known characters provides me with a base point, a frame to work within,” he explains. “With graffiti, the idea is to pick some letters from the alphabet, then go crazy with them or do whatever you want. Everybody starts with the same base point, and that’s graffiti. My starting point is to use characters in my artwork.”