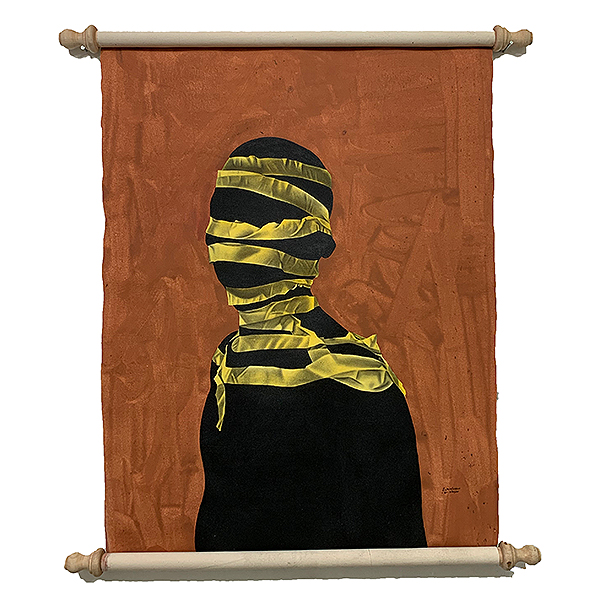 Opening Reception with the Artist(s): Saturday, February 5, 2022 5:00-9:00pm
If you have any questions or would like to purchase any of the works below, please send an email to contact(at)thinkspaceprojects.com.
For more information regarding purchases, shipping and payment methods, please click here.

Opening Reception:
Saturday, February 5 from 5pm-9pm | artists will be in attendance
– Masks are required during your visit –

Thinkspace Projects is thrilled to present an all new group exhibition and all new solo show simultaneously, continuing their 2022 momentum. Each artist’s work is unified by storytelling, displaying an array of memories and experiences within the walls of the gallery.

In Gallery One, four artists join forces for Intersections, filling the space with complimentary and contrasting works from Sean Banister, Alvaro Naddeo, Gustavo Rimada, and Manuel Zamudio. The exhibition is incredibly relevant, drawing on themes of time, identity, and blurring boundaries to explore true connection.

Southern California-based artist Sean Banister uses this show as an expansion and continuation of his work in 2020, delving into the identity of humans as storytellers and collectors. Having developed a strong interest in how the items we interact with and collect help us to craft our own self-narratives, Banister explores how this affects image and individuality, from the way one sees themself personally to the way they exist and are viewed in the world. While each of his pieces for “Intersections” is unique, together they all act as facets of the same experience of living in our current time.

Alvaro Naddeo approaches Intersections with the desire to create work that mixes personal memories with the collective memories of our society. In pulling textures from the places Naddeo has personally been and incorporating them into greater social and political commentary, he is able to tell stories that may not have previously been told. He works to give space to the marginalized and the minorities, “those who can see and smell everything good that America has, but are never allowed to get there.”

Gustavo Rimada brings the perspective of his own ancestry to the show. This body of work is part of an on-going series from Rimada, which tells a story about how our ancestors connect with us. “Whether it’s celebrating Dia de los Muertos in my work or telling old folk stories about our ancestors returning to nature, my goal is to create a space where you can feel the connection and spirit between nature and the afterlife.” This series is heavily influenced by his culture, emphasizing the connection between humans and nature from the day they are born to the day they pass away. With these works, Rimada aims to translate that journey, aiding viewers in understanding.

Manuel Zamudio also brings the theme of life and death into his collection, focusing on the transition between them. He maintains the post-apocalyptic world that he had built with his previous solo show here at Thinkspace, but delves into architecture and urban landscape as a foundation for the exploration of the afterlife. With new-age ghost-inspired characters Zamudio explores the delicate line between life and death, which grows thinner every day. He highlights the fragile boundaries between body and soul, life and death, day and night, living in the transitions.

In Gallery Two, Andrea Aragon fills the space with her latest solo show Somas Magicas. Aragon draws upon her own experiences and surrounding community to create breath-taking oil paintings that do not sugar coat the human experience. Aragon’s goal is to present an awareness and give a perspective of individuals whose story has yet to be fully told, reaching a broader audience than they might on their own. The artist hopes her works sheds light on how similar we are as inhabitants of this earth, and how we can benefit from just a little bit more understanding. With each piece, Aragon evokes compassion.

About Sean Banister
Sean Banister is a SoCal artist. Working as a high school teacher for the past 18 years, he has always been a passionate learner and works to bring that excitement for learning to the classroom. Banister is largely a self-taught artist, having pursued a degree in English and taken a just few very encouraging classes at the local community college to get back into drawing and painting after a long time away. In his work, Banister often chooses objects and their human counterparts to be the subject of his work, drawing out the relationships between them. Banister’s work draws out the narratives stored in the items in his paintings to reveal feelings we have about who we are and how we chose to exist.

About Alvaro Naddeo
Originally from São Paulo, Brazil, Naddeo has lived in Lima, New York City, and is currently based in Los Angeles. These urban environments shaped his memory and permeate most of his work. Naddeo’s father is an illustrator, and as a child he spent many hours drawing and watching him work. Constantly encouraged by his father, he was both inspired and intimidated. At 17, the intimidation got the best of him and he quit, choosing to pursue a career in advertising as an Art Director. This allowed him to exercise his interest in art, without requiring mastery with the pencil or brush. Twenty years later, while living in New York City he found himself inspired to once again pick up the brush. Now he is back to painting, this time Naddeo is not quitting.

About Gustavo Rimada
Born in Torreon, Mexico, Rimada and his family immigrated to California when he was seven years old. Raised in Indio, California, he began taking art classes at a young age and attended The Art Institute in Santa Monica California. After September 11th 2001, Rimada was inspired to join the Army, serving three years before returning to his true love, art. Rimada painted on any surface he could find, canvas, shoes, bags, etc, eventually finding the tattoo culture that inspired him to further pursue his passion for painting. When Rimada is not painting, he is a devoted father and family man.

About Manuel Zamudio
Zamudio is a painter, a muralist, and a storyteller. Born in Mexico City, Zamudio made his way to the talent-rich city of McAllen, Texas in 1992 at the age of 5. While dealing with the challenges that often come with assimilating to a starkly different culture at a very young age, Zamudio found refuge by immersing himself in art. As a self-taught artist, he started perfecting his technique by replicating comic books, without knowing or understanding the human figure and the concepts of color schemes. As he grew older, he started taking an interest in the urban culture of South Texas, learning color schemes, perception, shadow, and so on from local graffiti artists. Now, Zamudio has taken his passion into a new path: storytelling. He has displayed his
artwork in numerous galleries and museums in the United States and Mexico. His new line of work has been immensely inspired by great works of cinematography, street art, and post-apocalyptic sci-fi novels. His new work explores new methods of how to bring cinematography onto the canvas. Zamudio is a painter, a muralist, and a storyteller.

About Andrea Aragon
As an artist and first generation Mexican American, Andrea Aragon has chosen oil painting as an avenue to illustrate and shape the human experience within her community. She draws upon the community around her, the majority of which can be categorized as lower to lower middle class America. Aragon uses her ongoing knowledge of political, cultural, and social understandings to entice a juxtaposed narrative that invites the viewer to tap into their self-consciousness, ultimately creating raw and relatable works.

About Esihinlokun Wasiu
Eshinlokun Wasiu (b. 1998, Lagos, Nigeria) is a full time surrealist artist who sees life’s challenges as a tool for creating his masterpieces. And has been prolific in producing works that speak about the society and its effect on the people around. Culture, identification and power of humanity are a few aspects of his current research and artistic practice.

Eshinlokun Wasiu studied Business Administration at Yaba College of Education, Nigeria. His interest in art, as well as his career began while he was a kid with the support of his mother. Inspired by issues relating to him and those who are around him, he began creating works that reflect the everyday struggles of people, with the hopes of making a change in people life and way of thinking. He exercises himself by using of charcoal and acrylic paints to create silhouette that seem to have been in bond and value.

Eshinlokun is reintroducing the “ Surrealism “ movement in a way the world will appreciate in a different form. His also part of the title deed art collective curated by Ken Nwadiogbu 2019/2020. Also had a residency at AAF ( African Artists’ Foundation ) in the year 2020.

Eshinlokun Wasiu is constantly revitalizing his practice by challenging modes of Black representation. His oeuvres do not just encompass various forms of drawing using acrylic and charcoal, but most recently transcends into photography, sculpture, installation and performance art.

About Alex Face
Patcharapol Tangruen (aka Alex Face / b. 1981) is a well-known and influential graffiti artist in Thailand. Alex studied architecture at Bangkok’s King Mongktut Institute of Technology and earned a Bachelor’s Degree in the Department of Fine and Applied Arts. An interest in architecture led Alex Face to explore and wander the streets and back alleys of Bangkok for abandoned buildings, sites that he eventually used as a canvas to develop his street art.

Using Alex Face as his alter ego, the artist attempts to create a link with the urban population, the underprivileged of Bangkok and the surrounding provinces. His iconic character showcases the adventures of a disillusioned child in a baby rabbit costume who looks wise beyond his years, at first glance appearing cute, but all the time worrying about the future of our world.