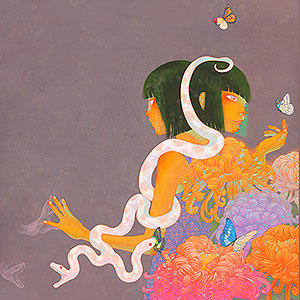 Thinkspace is pleased to present its second solo exhibition of works by Japanese artist Fuco Ueda in Odd-Eye. The Tokyo-based Ueda creates surreal paintings of enigmatic girls in strangely beautiful incandescent dreamscapes. With larger than life flowers and creatures ranging from moray eels to butterflies, her paintings are like apparitions pulled from the shadowy depths of the subconscious. Her mischievous adventurers are innocent and devious, at times playful and others sinister, suspended somewhere between the waking world and the beyond. An inscrutable universe of lush neon chrysanthemums and florid skins, Ueda’s world is a hallucinatory daydream.

Ueda’s works convey the lonely meditative feeling of dreams, a world set apart from the existence of others and self-sustained by isolated dread and reverie. At times a darkness pervades with recurring symbols like skeletal hands and the fiery orbs, or hitodama, of Japanese folklore, thought to be the souls of the dead. Another recurring symbol that figures prominently in her works is the chrysanthemum, also a symbol of loss, death, and vulnerability. These surreal apparitions reinforce a sense of displacement and transience. Her lithe figures, often charged with a cryptic eroticism, dissolve into the webs of these conjured worlds; like figments crossing over into ghostly recesses.

The tone of Ueda’s works tends to shift towards a lighter and more whimsical extreme as well. Her girls are often surrounded by small birds, butterflies, underwater creatures, beribboned pets, and dazzling flora, in dreamily abstracted landscapes that seem to glow and hum with weird life. The combination of these light and dark extremes is often unexpected, and psychologically evocative. Beautifully illustrated girls drip with honey and bare skinned knees, while snakes, fish, cobwebs, and bright fungi surround and shroud them. Contrasts abound in her choice of palettes as well, with the mixture of deeply pigmented hues, dark blacks, bright neons and iridescent pastel purples and blues.

Working primarily with acrylic paints and powdered mineral pigments on canvas, paper, and wood, Ueda dilutes her acrylics to create the consistency of watercolor. The unique quality of her surfaces is both chalky and luminous owing to this technique. Self-admittedly, Ueda is personally attached to her works, and her process is ultimately tantamount to a loss, preparing each for release into the world with the sprinkling of water as an acknowledgment of its completion and passing. We are left with the sense that Ueda’s world is in a constant state of transition and contraction, emerging and receding through the stitches of tenuously bound worlds.