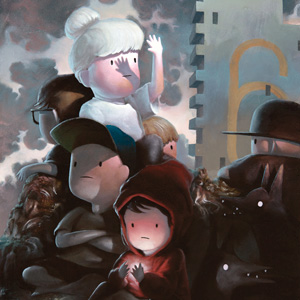 Concurrently on view in the Thinkspace project room is “Horizon Light”, featuring new works from the duo Giorgiko. The new series of paintings depicts the childlike characters of the Giorgiko universe caught in the twilight moments between light and darkness.  Through 11 new oil paintings, Giorgiko explores the transition and tension between seasons of life so often filled with uncertainty.  What lies in the darkness when the sun fades behind the horizon? Will the darkness flee from the morning light? What will comfort us in times of desperation? Come enter a world where wonder dwells in the mystery between light and shadow.

Giorgiko (pronounced jee-OR-jee-koh) is the product of a collaborative experiment between Darren and Trisha Inouye melding minimal, expressive character illustration with large-scale classical painting. Conceived in 2012, the Giorgiko universe is home to lost boys and wayfaring girls, and explores the stories of their wanderings and their dreams of being found again. Urban and classical youth are portrayed in city and nature scenes as part of their journeys through the world. The duo’s work is constantly influenced by urban culture, fantasy and classical art.

The husband-and-wife team first met while studying art at ArtCenter College of Design in Pasadena, California.  Darren was attracted to Trisha’s authenticity and quirkiness, while Trisha was drawn to Darren’s dashingly good looks.  Trisha hails from a Korean immigrant family in the San Francisco Bay area and was noticed at an early age for her talent in drawing.  She brings a cuteness and sweet innocence to Giorgiko’s characters.  Meanwhile, Darren is a 4th generation Japanese-American from Los Angeles who fell in love with hip hop dancing and graffiti in his youth, and that underground influence is evident throughout the Giorgiko universe.