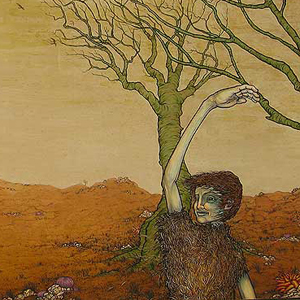 On the first day of June, 1976, Jesse Hotchkiss was brought into this world inside a dance studio to bohemian parents in San Francisco’s SOMA district. Though strongly influenced by his parent’s love for theatre and dance, Hotchkiss’ more introverted nature led him on a path to visual arts.

In addition to art, skateboarding was a passion that balanced his mind between the worlds of physicality and imagination. The overlapping values of these art forms blessed him with a strong confidence in his creative abilities. Along with early exposure to works by Matisse, Dali and Schiele; Hotchkiss was also captivated by the raw power of graffiti art. His introduction to graffiti happened while living in Santa Fe, NM. There he became strongly connected to the natural environment and muted palette of the southwest. Guided by these inspirations, and the strength to invent, he has forged a highly distinctive style. He combines intricate stenciled images, subtle textures and whimsical explorations in figure and form to portray moments of dreamlike intimacy, both visually foreign and familiar. Hotchkiss has exhibited his work in Australia, Japan, Hawaii, New York, New Mexico and all along the coast of California.