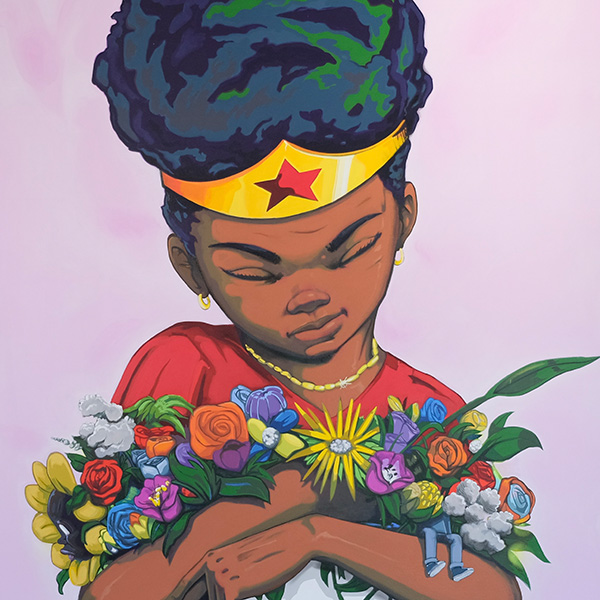 Opening Reception with the Artist(s): Friday, December 3, 2021 6:00-10:00pm
If you have any questions or would like to purchase any of the works below, please send an email to contact(at)thinkspaceprojects.com.
For more information regarding purchases, shipping and payment methods, please click here.

Curated by Thinkspace Projects and the FWMoA

Opening Reception:
Friday, December 3 from 6-9pm
* artist will be in attendance

Saints & Shepherds is an exploration of modern day mythology through the contemporary Afro-Futuristic lens of Hebru Brantley.

In Brantley’s Negros Mythos world, heroes can be Saints and Shepherds – Shepherds, the Purveyors of Culture, and Saints: the ‘outliers’ – those that are blossoming into new leaders by bringing foward a new way of thought. Saints often have their story embellished and revered when they pass on, while in their lifetime their ideas or ways are not always welcomed. This exhibition is a celebration of being a Shepherd and a Saint, echoing the process of going from adolescence to adulthood, from supporter to leader.

In the context of Sainthood, we are challenged to explore the definition of a hero. Themes of idolization and leadership are explored. In the current cultural system, previously accepted norms and expectations are being called to question and one is increasingly challenged to choose who their role models are based on their own set of values. This show explores the dichotomy of breaking down past role models by cultural reappropriation, while also building them up in the celebration of mythology itself. There is also a duality in the concept of reappropriation – where the current culture has often appropriated aspects of black culture, Hebru flips this concept, reimagining traditionally Anglo-Saxon superheroes as people of color.

About Hebru Brantley
Hebru Brantley creates narrative-driven work revolving around his conceptualized iconic characters which are utilized to address complex ideas around nostalgia, the mental psyche, power, and hope. The color palettes, pop-art motifs, and characters themselves create accessibility around Brantley’s layered and multifaceted beliefs. Majorly influenced by the South Side of Chicago’s Afro Cobra movement in the 1960s and 70s, Brantley uses the lineage of mural and graffiti work as a frame to explore his inquiries. Brantley applies a plethora of mediums from oil, acrylic, watercolor and spray paint to non-traditional mediums such as coffee and tea. Brantley’s work challenges the traditional view of the hero or protagonist and his work insists on a contemporary and distinct narrative that shapes and impacts the viewer’s gaze.

Collectors of his work include LeBron James, Jay-Z & Beyonce, Lenny Kravitz, George Lucas, and Rahm Emanuel, among others. Brantley has collaborated with brands like Nike, Hublot, and Adidas.

In October 2019, Brantley opened an experiential fine art installation fueled by the narrative of his characters FLYBOY and LIL MAMA. The 6,000-square-foot installation in Chicago’s Pilsen neighborhood hosted over 23,000 ticketed guests and offered them limited-edition merchandise. Brantley currently resides in Los Angeles where he is expanding into content creation including the adaptation of the FLYBOY Universe through his media company, Angry Hero.

Brantley earned a B.A. in Film from Clark Atlanta University and has a background in Design and Media Illustration.