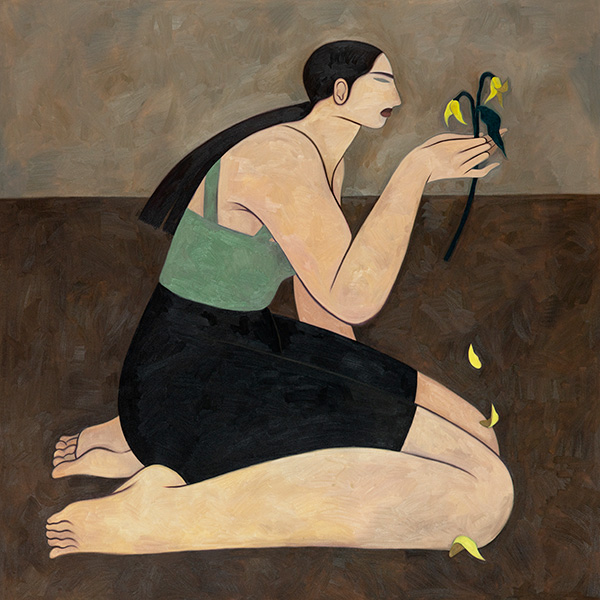 On view October 16 – November 6 in our main gallery

Thinkspace Projects is thrilled to present Hilda Palafox’s (also known as PONI) latest solo show, ‘Un día a la vez.” Featuring an entirely new collection of the feminine subjects she is known for, there is an aura of mystery surrounding each piece.

This body of work furthers Palafox’s mission to explore the meaning of the feminine physical, emotional, and mental state. Examining the visible body as shapeless matter willing to mold itself, Palafox utilizes shapes, colors, and textures that seem to embody Latin American women. The radiant colors, robust silhouettes, dark skin, and monumental bodies intermingle with the spaces containing them, creating a study in space and femininity as a concept.

In describing the show, Palafox uses the phrase La vida a veces se manifiesta al regar tus deseos sin prisa, un día a la vez, which translates to “Sometimes life manifests itself by watering your wishes, unhurriedly, one day at a time.”

The show takes this statement to heart, creating a balanced and patient portrait of the women who have gone above and beyond to physically, energetically, and intellectually fill the world. Femininity becomes an important tool in restoring balance.

About Hilda Palafox (aka PONI)
Hilda Palafox (b. 1982 Mexico) attended the School of Design of the National Institute of Fine Arts (EDINBA) and majored in Editorial Design. In 2011 she began her career as an artist producing works in different media, from illustration to ceramics, painting and monumental murals in Mexico, the United States, Canada, Japan, and Brazil. Hilda presented her first solo exhibition in Japan after an artist residency at AIR Onomichi in 2018. This was quickly followed by solo exhibitions in Los Angeles, Melbourne and Mexico City. The female body inspires Hilda Palafox’s work as the central element. Her images present a fresh look at the traditional representation of the female body in Western art.