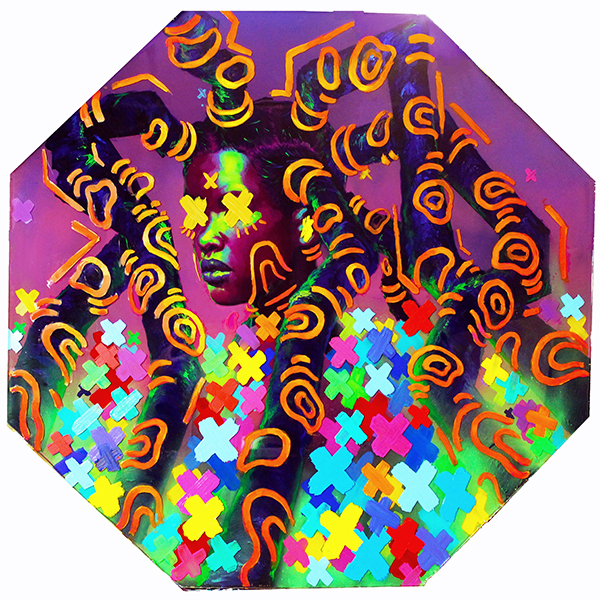 Thinkspace Projects is excited to present Oscar Joyo’s debut west coast solo show, ‘HOME_BODY.’ In this collection Joyo strikes a balance between honoring his Malawian heritage and the world around him, resulting in pieces that were created both for himself and a broader audience.

In this case, HOME_BODY has a double meaning. The first is the one most of us are familiar with, being someone who finds joy being at home, and the second is a more personal approach, referencing the world that is always active in Joyo’s mind.

Joyo is becoming well known for his expressive portraiture that features his unique combination of photo realism and tribal patterning rendered in bright neons, coated in layers of thick, clear resin. His process-driven practice fuses together traditional and digital mediums to explore imagery and themes connected to afrofuturism and afrosurrealism, all imbued with a spiritual psychedlia.

For Joyo, the creative process is profoundly influenced by music, and his interest in visually representing the sounds he perceives. As Joyo overlays his portraiture with vibrant, dynamic lines, shapes and patterns, they are in response to musical tempo, timbre and mood. As he further explores and understands his personal relationship with sound and it’s conversion into visual imagery, Joyo hopes that this synesthesia will be a point of connectivity for the viewer.

“These works are inspired by anxieties and personal revelations during times of turbulence. HOME_BODY expresses a feeling of solace while exploring new and evolving themes within my practice. This body of work is a result of finding comfort and growth within oneself.”

Each element of the pieces works together to create this complex exhibition. Instead of a traditional orientation with each painting, Joyo opted to maximize the depth and dimension. The resulting collection explores balance, growth, and evolution.

About Oscar Joyo
Oscar Joyo (b.1992) is a Malawian born, Chicago based artist. His genre of work blends elements of Afrofuturism and Afrosurrealism. Oscar’s love for the arts began as a young boy drawing cartoons in Malawi. He and his passion for art traveled all the way to Chicago, where he graduated with a bachelor’s degree in Life Drawing at The American Academy of Art in 2015. Shortly after graduating, he explored and developed his technique of tribal patterns and vivid portraiture.

His primary medium is acrylic paint and resin on wood. The recent inclusion of resin as a top layer is a means to create dimension and depth within his paintings. Oscar attributes his chromesthesia (the ability to see colors when hearing sounds) to his use of various gradients and psychedelic colour schemes. He pays homage to his Malawian heritage by his use of percussive shapes and patterns that breathe life into the paintings while simultaneously celebrating Blackness and hope for a better future.