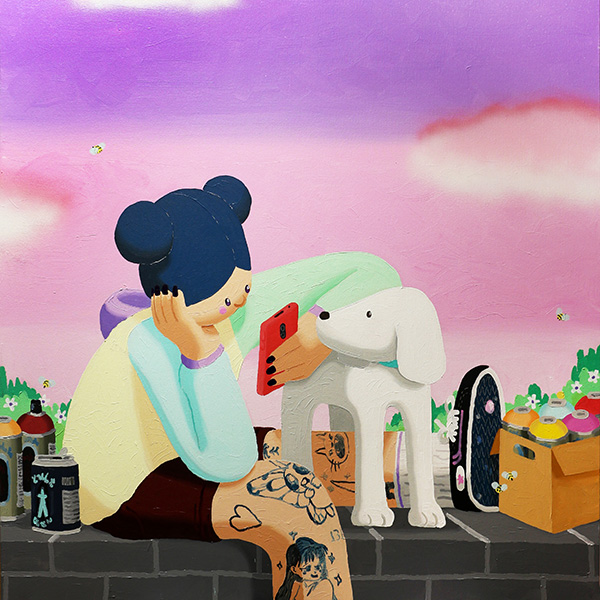 No Regrets (Gallery I)

Thinkspace Projects is thrilled to present Imon Boy’s latest solo show, ‘No Regrets.’ An incredible gallery show from the prominent multi-disciplinary artist, the exhibition explores the crossover between his graffiti work and studio practice.

While Imon Boy closely guards his identity, his work is full of personality, making even his persona immensely engaging. The Malaga-based graffiti writer has crafted a career by mocking the “graffiti establishment.” He rejects the idea of working for the purpose of impressing others or using traditionally technical skills, opting to create paintings and illustrations that are tongue-in-cheek but surprisingly tender, exploring and evoking universal themes and emotions.

Imon Boy creates varied work by placing characters within universally popular memes, representing people, and different destinations. He brings to the artistic plane everything that has formed him as a person throughout his life: graffiti, video games, internet, cinema, music, travel, etc. The key to the production of his art is the union of all of these influencing factors. These pop elements and his natural curiosity motivate the search for new forms and settings, leading to ultimately surprising work.

“When I work in the studio, I have all the time to create. I can debug all my ideas and play with all the details. In the street, I am more limited by technique and time. I enjoy everything differently. In the studio works, I feel as free as when painting in the street. I talk about myself, as I do in graffiti, but in a more subtle way. I capture everything that represents me and what has formed me as a person. Cinema, music, graffiti, friends, police, travel, girls or any experiences from my life. It’s like writing a diary. Some things are fiction, others are real and others I prefer to leave to the viewer’s imagination.”

About Imon Boy
Imon Boy lives and works in Malaga, where he was born. Discreet and solitary, the artist’s identity is a mystery. A conscious choice to uphold his relatability, he explains, “behind Imon boy there is a person like you.” His designs dismantle the stereotypical testosterone-filled image of the graffiti artist and convey a tender and ironic vision of what it means to paint illegally on the street, building an unexpected discourse riddled with ‘fails’ with the police and romantic messages for his secret love. Like any child of the 90s, among his favorite references are video games, movies, the internet, music and the trips he makes.

His reach spans the globe. In addition to tagging walls throughout Spain, Imon Boy has exhibited in locations including Munich, Seville, Hamburg, Sydney, Taiwan, Madrid, Los Angeles and New York City. In recent years he has found ways to merge his street art and fine art practices, sharing his work with more and more people.