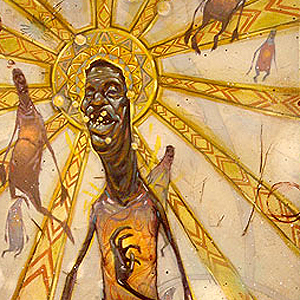 Ekundayo was born in Honolulu, Hawaii in 1983 and raised there until the age of five at which point he left with his father to travel around the United States. After his father passed away in 1994 he found an escape through graffiti and hasn’t looked back or stopped painting since. Among Ekundayo’s many influences are Arthur Rackham, Nicoli Fechin, Toulouse Lautrec, Lucien Freud, Henry Ossawa Tanner, Gustave Klimt, Giovanni Battista Tiepolo, Sergio Toppi and Alan E. Cober; to name just a few. Ekundayo studied Illustration at Art Center College of Art and Design in Pasadena. Ekundayo’s debut solo show, “Interlaced”, deals with the relations between people and how we are all connected in some way, no matter how elite, or oblivious we are to the issues surrounding us. Ekundayo expresses this by creating a sea of interconnected lines amidst a landscape of vibrant colors and surrealistic characters that weave in and out of dream like compositions.

“This piece was created after listening to an album of Congolese boys singing Christian church hymns. What I found so interesting about this album was that during the time of its creation, the Congo was a very turbulent place, as it is today. The album was made during the 1960 independence of the Belgium Congo, and even more amazing is that the father who looked after the mission, Father Guido Haazen, didn’t try to assimilate the boys to his culture, but rather learned from them as they learned from him. So it was through there music that they rouse above the turmoil of the time and found freedom through there music. So in my piece I have a central figure rising above a mess of interlacing lines that represents the congestion and feud of the time.“ – Ekundayo