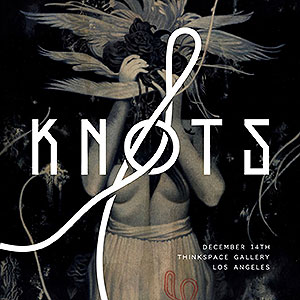 João Ruas (b. 1981) is a visual artist from São Paulo, Brazil. After graduating with a BA in Graphic Design, he worked inside studios in the United Kingdom and Brazil but since 2009 his focus is on personal artwork and exhibitions. Ruas combines ancient references with the contemporary, to create timeless visual mythologies. A gifted figurative artist, his works explore the universal themes of transition, power, strength, transformation and loss with an empathetic tenor. His haunting works are inspired by the age-old function of myth as an antiquated system of attributing meaning to natural and human chaos. Ruas’ beautifully executed lines, love of detail, and quasi-Gothic aesthetic, recall the late 19th century golden age of illustration, and its propensity for lush hand-drawn worlds. Fascinated by the enigmatic mystery of lore and symbols, and drawn to the use of recurring contrasts, Ruas punctuates his work with a system of evasive signs. His pieces always tend to reveal the spectral traces of graphite in the end product, a choice that discloses both the presence of the artist and the ghostliness of his universe.