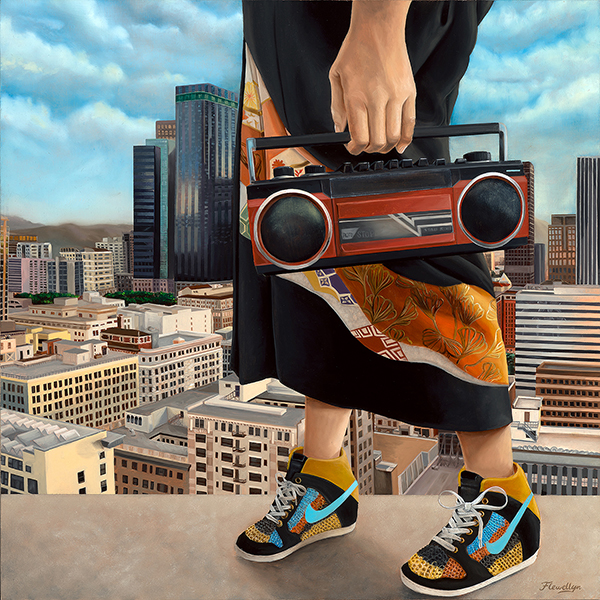 Always in pursuit of uniting and elevating the New Contemporary Art community, Thinkspace Projects teams up with Tialoc Studios and the California Cowboys Collective to present ‘RAIZ’, an all day blowout event to mark the opening of the two month art show at The Brand Library and Arts Center in Glendale, California.

With 60 artists in the group show alone, the extravaganza is sure to be diverse and varied, bringing universal appeal from so many incredible contributors. With a focus on local Los Angeles based artists, the lineup is as impressive as it is varied, including new work from the likes of Antonio J. Ainscough, Young-Ji Cha, Kristy Moreno, Zeye Oner, Perez Bros, and Aof Smith just to name a few. Solo shows from Anthony Clarkson, Ken Flewellyn, Matthew Grabelsky, Anthony Hurd, and Cody Jimenez round out the gallery exhibits, filling the walls with innovative and genre-blending pieces across mediums. It’s not just the walls inside the Arts Center, but the walls inside the hallways of the Brand as well that are being transformed for this event, with site-specific murals from Brek, Love Yo Dreams, and Mr. B Baby adorning the entry hallway area and outdoor courtyard.

The surrounding grounds themselves will also be bursting with compelling content, from the food provided by Zavalas Pies, Sweet Life LA, and Bad Jimmy’s to the car and bike clubs in the parking lot with Cabrones Car Club, Ghetto Car Club, and Bikes On The Blvd. That’s not all that is happening for the opening event, so be sure to keep an eye out for local artisans painting live around the grounds alongside video projections, a cash bar and live DJs providing entertainment all day and into the evening hours. Save the date and we will see you soon!

The show opens January 21st with a reception from 4PM to 10PM. They will remain on view until March 17th at The Brand Library and Arts Center in Glendale, California.

Since my last solo show in 2019, the world is a changed place. But I view this new reality from the lens of my history and the culture that has shaped me. The community of artists and friends that surround me helped me stay focused and sane. While there are similar themes from my previous shows, I have been looking inward to my personal experiences more. Self examination is not always easy, and it may take some time for me to open up to people. My hope is to continue to share pieces, like a Remix’ tape of familiar songs, with a new twist. As an extra bonus, my longtime friend, mentor, and Thinkspace Projects co-founder LC collaborated on meaningful pieces with me. His collages and my paintings combine to capture the true essence of a mixtape… bringing a certain vibe when you need it most. I hope this Remix’ sends you on a sonic journey through art.

Artist Bio:
Inspired by his lifelong love of Hip Hop and his coming of age as a b-boy during its golden age in the 90s, Flewellyn’s work has always been about music and its impact on his personal vantage point and outlook on the world. As a cultural form, Hip Hop emerged from a localized cultural moment only to evolve into a variegated and international form that would systemically embrace the freedom of appropriation, and the complexity of multiple voices. This idea of cultural heterogeneity has influenced recurring themes in his imagery and has shaped his belief in the positive power of cultural mash-up.

The subjects of his paintings remain anonymous, visible only by hands, body, and gestures, seldom, if ever, are faces or individuals revealed in their entirety. The subject’s identity, as a result, is relayed by the presence of revelatory objects, tattoos, and accessories – external clues that point to something beyond the seen and allow for the aesthetic to prevail over individuation or the distraction of specificity. That being said, however, Flewellyn depicts real women based on actual people – friends, and strangers – anchoring his imagery in reality rather than unrealistic idealizations.

The juxtaposition of formal cultural garb and pop cultural accoutrements keeps the work fascinating. These tightly cropped compositions are always informed by the presence of Hip Hop imagery, whether in the form of boom boxes, tapes, gold chains or typography. Playful and energized with tactility and detail, they’re both sensual and contemporary – solemn and light.