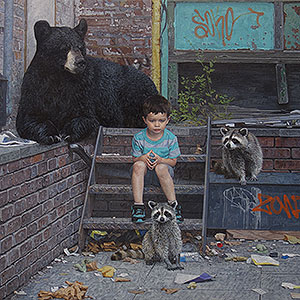 (Los Angeles, CA) – Thinkspace is pleased to present new works by Houston-based artist Kevin Peterson in Wild. Peterson, a gifted hyperrealist painter, creates a fictional world in which innocence and collapse are brought into difficult proximity. His arresting images combine portraits of children accompanied by kindly sentient beasts in a state of kindred displacement. Alone, though together, in strangely desolate, richly graffitied urban scenes, these babes and their benevolent conspirators appear interchangeably as beacons of hope and symbols of dispossession.

Here, a panther provides an angelic little girl with an unlikely guardian; a boy sits alone in an abandoned graffiti-tagged building flanked by a pair of ravens and a gentle fox – a corrugated cardboard crown cast down on the floor beside him like some failed promise of clemency and exemption. In spite of seemingly bleak, if not potentially catastrophic, circumstances, the isolated child protagonists in Peterson’s works, bereft amidst modern-day ruins save for the companionship of their wild, bestial cohort, are calm, peaceful, and strangely emancipated. A feeling of persistence and salvage dominate these visual metaphors for human survival; life, in the end, persists in its way and under the most iniquitous and impossible conditions.

Always in search of poetic tension and compelling contrasts, Peterson alloys unlikely parts: beginnings and ends collide, the young appear in worn and weathered worlds, innocence is forced into experience, and the wild infringes upon the ‘civilizing’ city limits. In Wild, Peterson explores themes of protection and marginalization, staging wild animals, ironically, in the humanizing and civilizing charge of caregivers. Though a recurring suggestion in previous works, the role of the animal in a nearly shamanistic role as protector and watcher appears more overtly in the new. Small children are attended by wild bears, watchful raccoons, gentle fawns, mythic looking ravens, owls, and jungle cats, among others, as they hold a living and protective vigil against the crumbling architectures around them; their guardianship staged like a protective bulwark. The compositions feel more symmetrically staged in these new works, while pairs of animals, particularly ravens, appear as dual harbingers of birth and death, bookending the endless transformations of life in between.