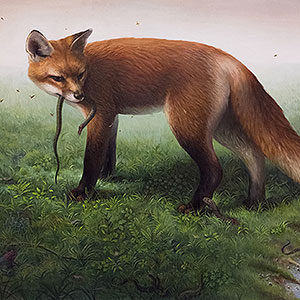 (Los Angeles, CA) – Thinkspace is pleased to present new works by Southern Korean, Toronto-based artist and illustrator Kisung Koh in Way of Life II, the artist’s first solo exhibition in the gallery’s main space. Koh creates an allegorical universe through which to explore human loss and longing. The animal subjects in his paintings are laden, haunted, in a way, by a parabolic significance beyond their nature. Hyper-realistically rendered but staged in abstracted or imagined spaces, these creatures become emissaries of a spiritual dimension. Inexplicably prescient as both surrogates and revenants, they’re split between past and present tenses, animated by memory, the insatiable pining of nostalgia, and the impossible projections of fantasy. In search of the spiritual in nature, Koh’s emotionally heightened naturalism stages the animal as a manifest vehicle of the inexpressibly human.

Born in South Korea, Koh moved to Canada in 2006. His earliest childhood memories are of exploring rural settings where he grew up in Korea, a place that has fostered his lifelong love and attachment to nature. Koh studied illustration at Sheridan College in Toronto, Canada, graduating with a BAA in 2012, and works professionally as an illustrator in tandem with his fine art practice. He has exhibited extensively in group shows internationally, though Way of Life II is only Koh’s third solo exhibition to date. Inspired by the intersection of nature, memory, and dream, his world of imagery is an extended metaphor for the personal and intrapsychic struggles in which our modern humanity is mired.

The artist describes an early experience of witnessing a family of deer at close distance in the wild, and the inexplicable ‘presence’ of the spiritual harbored within nature, often thought to be an ingress or gateway to the spectral or supernatural. The animal world attentively and lovingly brought to life by Koh, is steeped in this inscrutable magic. He accesses an ancient and collective impulse towards the enigmatic displacement of the human onto the animal found in myth and archetype; a storytelling convention and psychic tool shared, since time immemorial, across multiple locations of culture and place, perhaps due in part to the animal exemption from language and its self-conscious legacy of human bondage. Koh projects affect onto the creature threshold, dramatizing a world of animal proxies to explore mortal fear, loss, hate, dislocation, isolation, mercy, and love, in the absence of any divisive human ideologies of belonging.

In Koh’s works, the inexpressible elisions of language are given a tangible, universally approachable guise in animal form. In previous bodies of work, he has explored elephants, deer, fox, owls, tigers, and has even dedicated an entire series of peaceful portraits to the itinerant polar bear, personally moved by the tragedy of his forced nomadism and rapidly receding habitats. Hoping to inspire pause, appreciation, and an increased awareness of our responsibility to protect the nature in our midsts, Koh’s dramatically high contrast and yet simultaneously diffuse and dreamlike works in oil, oscillate between the idyllic and the unsettling.

In Way of Life II, Koh considers the necessity of interrelationships, and the fundamental exclusions and reciprocities established between creatures in wild coexistence to survive. Koh hopes to encourage the viewer to question the basis of these exchanges and to think about how we occupy its propositions. Are we aggressors and predators, or hapless victims? Or, as is more generally and imperfectly the case, a complex and unreconciled embodiment of the two.