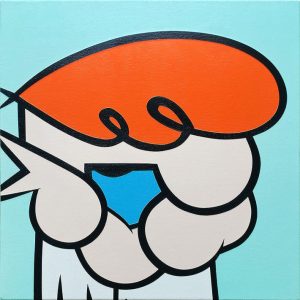 Come Out and Play(Project Room)

Opening Reception with the Artist(s): Saturday, September 19, 2020 Virtual Opening via Instagram Live
If you have any questions or would like to purchase any of the works below, please send an email to contact(at)thinkspaceprojects.com.
For more information regarding purchases, shipping and payment methods, please click here.

Thinkspace is pleased to present the debut North American solo exhibition from pop artist Kobusher, hailing from the Philippines. Being a child of the 80’s, the artist was raised on pop culture and, in turn, his visual narrative has been honed with the help of Sesame Street, Keith Haring, Lee Quiñones, Run Dmc, and MTV.

Kobusher attended the University of the Philippines where he received his Fine Arts degree (majoring in painting). Sadly, like many a young art school graduate, he went into advertising and marketing to make ends meet, while never loosing site of his first love, painting.

In 2015 he literally walked out from his work and decided it was time to pursue his dream of becoming a full-time artist. He felt that he had done everything he could as an artist during his stint as a Creative Director at one of Philippines’ top ad agencies. One by one he was able to produce a series of paintings for his debut solo show. Secret Fresh Gallery in the Philippines gave him his first break, and in January of 2016 they hosted his first solo exhibition.

Since then, Kobusher has been busy building an ever-growing legion of fans the world over. From sculptural editions to screen prints, the artist continues to explore new avenues of expression on a regular basis. For his North American debut, the artist has delved heavily into the memories of his youth and the new body of work is a celebration of pop culture in all its many forms.