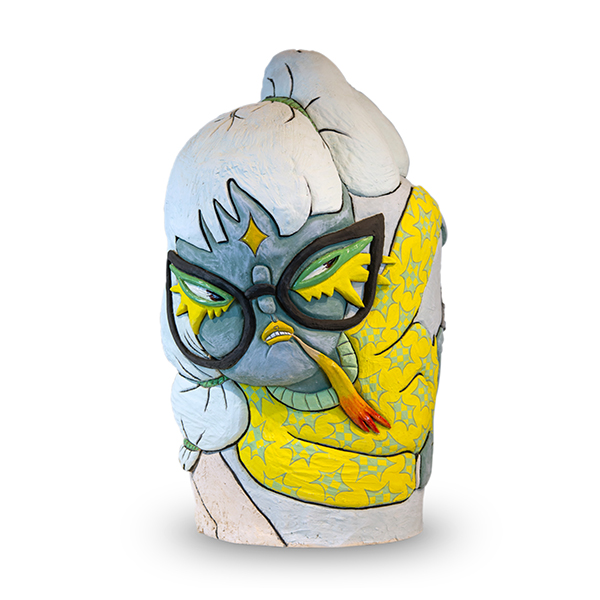 In Gallery III, Kristy Moreno presents Matter of Survival, which focuses on the imagined personas of radicalized future ancestors. The hand crafted ceramic forms are of fictional characters often resembling feminine personalities paused in space and time. Moreno examines the essence of these future communities through the use of body languages and attitudes to further explore themes of rage, empathy and curiosity.

“Individualizing these characters grants me the freedom to be curious about the influences they might have inherited from past societies, as I try to observe how the past often shapes future worlds. I’d like to imagine that these future ancestors survived by decolonizing their way out of patriarchal systems. They are no longer conditioned to believe that they have to live in someone else’s reality that is deemed worthy of living.”

About the artist…
Kristy Moreno was born in the city of Inglewood, California and often found herself creating doodles of her favorite cartoons. Moving to Orange County inspired her to become involved in the art communities of Santa Ana, leading her to collaborate with group collectives including We Are Rodents and Konsept. She then attended Santa Ana College where she found an interest in ceramics that led her to transfer to California State University, Chico to pursue a BFA degree. Her work now spans across mediums to bring awareness and visibility to an abundant future where mutual aid is possible.