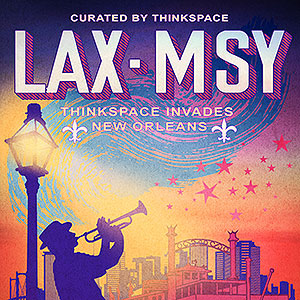 Excited to get down to New Orleans for the first time ever and partner with our good friends at Red Truck Gallery this coming August. Over 100 artists will be taking part in “LAX / MSY” in what will be the largest collection of artists from the New Contemporary Movement under one roof to date in the south.

All the artists have been asked to work within the same space confines of 12×12 inches (30×30 cm) and left to their own devices from there. We’re excited to see the results and share them with you all this August. This collection helps to showcase just how vast and varied the Movement is, from portrait based works to the more fantastical, from landscapes to design based abstract works… “LAX / MSY” promises to bring your Instagram feed to life and expose you to your new favorite artist.

We are excited to be bringing down ABCNT and Spenser Little to add a li’l of their flavor to the French Quarter as well as add some nice touches throughout the exhibition itself. Looking forward to seeing what these two creatives come up with. Laissez les bon temps rouler!!!!

Curated by Thinkspace Projects.
Thinkspace was founded in 2005; now in LA’s Culver City Arts District, the gallery has garnered an international reputation as one of the most active and productive exponents of the New Contemporary Art Movement. Maintaining its founding commitment to the promotion and support of its artists, Thinkspace has steadily expanded its roster and diversified its projects, creating collaborative and institutional opportunities all over the world. Founded in the spirit of forging recognition for young, emerging, and lesser-known talents, the gallery is now home to artists from all over the world, ranging from the emerging, mid-career, and established.

The New Contemporary Art Movement, not unlike its earlier 20th Century counterparts like Surrealism, Dada, or Fauvism, ultimately materialized in search of new forms, content, and expressions that cited rather than disavowed the individual and the social. The earliest incarnations of the Movement, refusing the paradigmatic disinterest of “Art” as an inaccessible garrison of ‘high culture’, championed figuration, surrealism, representation, pop culture, and the subcultural. By incorporating the ‘lowbrow,’ accessible, and even profane, an exciting and irreverent art movement grew in defiance of the mandated renunciations of “high” art. Emerging on the West Coast in the 90’s partly as a response to the rabid ‘conceptual-turn’ then championed on the East Coasts, the Movement steadily created its own platforms, publications, and spaces for the dissemination of its imagery and ideas.

Though the New Contemporary Art Movement has remained largely unacknowledged by the vetted institutions of the fine art world and its arbiters of ‘high culture,’ the future promises a shift. The Movement’s formative aversion to the establishment is also waning in the wake of its increased visibility, institutional presence, and widespread popularity.

Thinkspace has sought to champion and promote the unique breadth of the Movement, creating new opportunities for the presentation of its artists and work. Though still very much invested in the elevation and exposure of its emerging talents, the gallery, now in its 13th year, has come into its own with a roster that reflects this maturity. An active advocate for what is now one of the longest extant organized art movement’s in history, Thinkspace is an established voice for its continued growth and evolution.

The gallery has in recent years expanded its projects beyond Los Angeles, exhibiting with partner galleries and organizations in Berlin, Hong Kong, London, New York City, Detroit, Chicago, and Honolulu among many others, participating in International Art Fairs, and curating New Contemporary content for Museums. Committed to the vision, risk, and exceptional gifts of its artists, the gallery is first and foremost a family. From the streets to the museums, and from the “margins” to the white cube, Thinkspace is re-envisioning what it means to be “institutional.”

Red Truck Gallery
Red Truck Gallery is based in the historic French Quarter of New Orleans. Red Truck Gallery was founded in 2006 by owner Noah Antieau and is curated by Gabriel Shaffer and Rachael Cronin. We specialize in Contemporary Folk Art, Outsider Art, Americana, Low Brow and Pop Surrealism, in a welcoming atmosphere that is in warm opposition to the customary frills and stark white walls of the traditional art scene. Our artists work in an impressive range of art styles and mediums, but all are meticulous craftsmen who relish the detail and hard work that goes into making a piece.

After years of being a traveling gallery, exhibiting at shows, pop up curations and art fairs in Miami, New York, Los Angeles, London, Paris, and seeing just about every little roadside town in America along the way, Red Truck returned to its permanent home in 2014, on Royal Street in New Orleans, the only place we can imagine settling down.