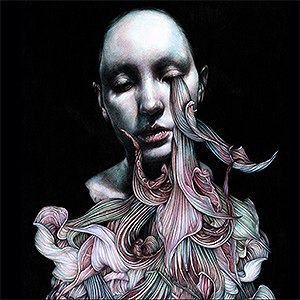 Thinkspace is pleased to present its second solo exhibition of new works by Italian artist Marco Mazzoni in Dear Collapse. Mazzoni’s phenomenal drawings have the dense opacity and immersive depth of paintings. He achieves this quality of detail and rich tonality, more commonly associated with wet media, through dry, converting traditional old masters’ painting techniques to pencil. These emphasize dramatic uses of light and contrast, like chiaroscuro and tenebrism, to create dramatic extremes and pitches. The density and richness of his works on paper belie the simplicity of their materiality; though seemingly plush and heavy with wet pigment, they are entirely rendered in Faber Castells. Originally from Tortona in Northern Italy and now based in Milan, Mazzoni is known all over the world for his hauntingly beautiful images of women partially obscured by a hallucinogenic flood of flora and fauna. Caught somewhere between the swell of an eruption and the depletion of devouring, the faces Mazzoni reveals from beneath their burden of petals, leaves, and wings seem to bloom and corrode, as though possessed by a manic biology.

Inspired by ancient Sardinian folklore and its traditions of oral storytelling, Mazzoni is fascinated by the history of its matriarchal culture, and the central role women played as herbalists and healers in the 16th to 18th centuries. These women were objects of both admiration and dread, occupying a position of proximity to the great mysteries of life and death as both midwives and shamans; agented in the rituals of birth and dying. Myths grew from these powerful matriarchies and verbally recounted stories of darkly worlds had women as its subjects and arbiters. Prominent in Sardinian myth are Janas and Cogas, female figures deeply connected to nature who were either enchanted menders or seductive, curse-wielding, witches. Mazzoni’s works capture the ambiguity of these ancient harbingers of feminine power – galvanized as emotional extremes in his works. They appear as beautiful and seductive at times, or as vaguely ominous and morbid at others.

The artist’s technique involves the application of several meticulous layers of color pencil, much like the under paintings used in wet media, and “glazes” or final veils of color are applied as a finishing step to unify the pigment and visual tone of the works. Sketches have always been an integral aspect of the artist’s practice; the preliminary space in which he resolves his compositions and develops concepts and technique. Dear Collapse will include one of Mazzoni’s complete sketchbooks, available through the gallery for the first time, which will be filmed in its entirety by Thinkspace.

Mazzoni’s imagery conveys a heavy sensuality. Faces remain unspecific and anonymous, eyes are seldom revealed, either masked or left as expanses of negative space. The figurative component of his work functions almost as a vessel from which the flowers, plants, and butterflies burst. Seeping from mouths and consuming skins, the plants and flowers – direct references to the ancient traditions of herbal healing and psychoactive poisons – are inextricably merged with bodies. It is always somewhat unclear as to whether the growth comes from within or without, whether the body is the agent or the victim of its consumption. The works are also undeniably erotic, magnetized, suggesting something of the ambivalent coexistence of human desire and repulsion – frenzied bedfellows like beauty and disgust, vitality and rot, life and death – these figures, eerily more than human, are uncomfortably necromanced and bloated with strange, beautiful life.