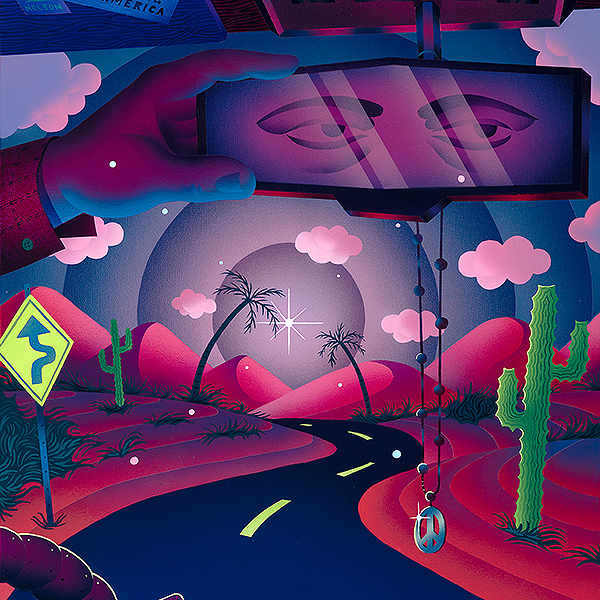 ‘Anywhere & Here’ presents a series of paintings that depict a shifting cast of protagonists from Detroit based artist Michael Polakowski. Each character is shown grappling with the reality of the here and now, while dreaming of the potential of anywhere. Familiar motifs, such as watermelons and pool halls ground this body of work in the American Midwest, where I was raised and currently work. These images are contrasted with depictions of dunes, Palm trees, and winding roads that infringe upon this familiar space and entice the protagonists with the potential of what lies beyond.

The shows references the narrative structures of absurdist novels, like Franz Kafka’s “The Castle” and Dino Buzzati’s “The Tartar Steppe.” Both novels feature protagonists trapped in their position in life, yearning to either escape a place or achieve acceptance within it. Using both these texts as a jumping off point, the paintings within this show expand upon my life in the Midwest elaborating on how it can be both comforting and insulating. Within the narrative of the show, a shifting set of often unseen protagonists are shown grappling with the idea of a far off and unreachable castle. These lyrically idealized structures are seen as vague objects on a horizon line, acting more as a fixed point of navigation and less as a goal that can be realistically achieved. “Anywhere and Here” is a reference to our own sense of presence. It acts as a response to the question asked by each painting in this series “where can we find clarity in our day to day lives?”

Artist Bio:
Michael Polakowski began his studio practice in 2016 in Detroit, MI. In the first few years of his career, and throughout his upbringing in the Midwestern United States, he often felt like he was missing out on a sense of clarity that only existed somewhere else. His work came to focus on how mental health frames and contextualizes our view of the world, often using windows or other visual portals to represent the boundary between our present lives, and the seemingly far-off idealized world. Polakowski thinks of each painting as an opportunity to expand upon an ongoing narrative within his work, a narrative where the protagonist is grappling with finding a sense of self, maintaining presence in their environment, and connecting to the world around them. However, these abstract ideas are usually depicted in scenes like stolen cars abandoned in a river-bed, or harrowing tales of a lone explorer lost in a metaphysical desert. With his work, Polakowski is always trying to strike a balance between “heaviness” and “lightness.” That’s why, at first glance, his work is vividly colored and populated with inviting imagery. It’s only through further investigating the connection between the images that the deeper narrative surfaces.

Detroit offered Polakowski a lot of unique opportunities as an emerging artist, whether that be his first residency with Red Bull House of Art or his most recent mural completed in collaboration with the Detroit Institute of Arts. His work has been recently included in group shows in London, New York, Los Angeles, and Hong Kong.