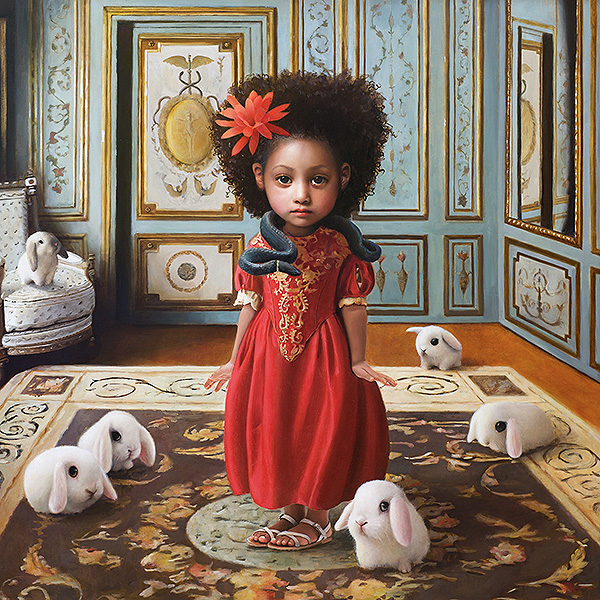 Examining the specifics of gender mandates, Esther investigates how the construction of our roles identity as women is based on the fulfillment of specific roles, and further explores the women who, despite society’s pressure, disobey and stray from these societal expectations. She turns a critical eye to the myth of Prince Charming and romantic love, exposing patriarchal motivation within classic tales.

Esther’s work is deeply personal, drawing on her own experience as an only child in the countryside to inform the isolation she captures in her paintings, and her own experience of experiencing gendered violence to fuel the liberating feminism that inspires each canvas.

“We live in societies based on relations of domination and on the exclusion of the different, the other, the vulnerable. These attitudes of domination take place at all levels and lead us not only to the destruction of nature and the mistreatment of nonhuman animals, but also to the oppression and discrimination of some human beings over others, whether by gender, ethnicity, sexual option or different abilities.”

Acknowledging that the state of the world is deeply troubling, from gender inequality to broader injustice, Esther remains optimistic. She believes in a more just world, and hopes to further that possibility through her work. With special attention to themes of inclusion, compassion, empathy, and caring, she communicates the importance of respect for both humans and non-human animals.

About Olga Esther
Olga Esther (b. 1975 Spain) is an artist based in Valencia, Spain. She is a graduate of fine arts from the Polytechnic University of Valencia and received art scholarships in both Prague and Mexico. She also holds a master‘s degree in video games. Olga Esther paints princesses who don’t want to be princesses, birds who cry blood and toads who kill themselves because they are ignored. She uses the symbolism of “princess-tales” to talk about gender and feminism. She paints the invisible ones, the little forgotten girls, the little nobodies of this world, but above all, all those who do not have anyone.