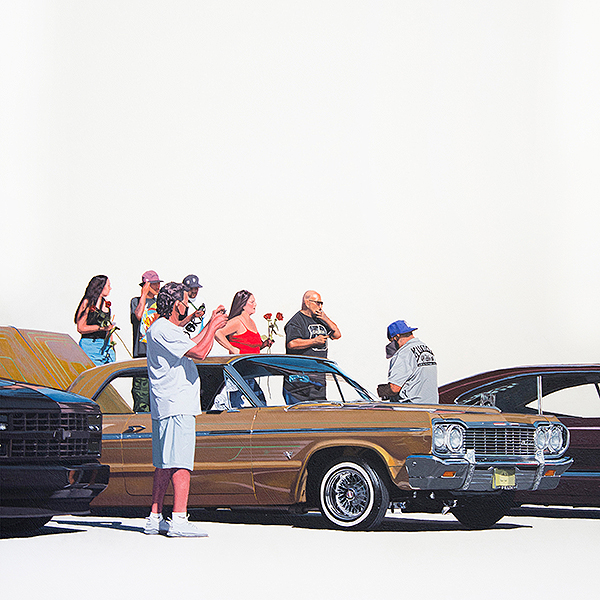 Southern California is indisputably a hub of culture. With so many influences and interests it can be difficult to encapsulate, but The Perez Brothers have mastered just that. It is their understanding of LA, particularly the lowrider culture, that has generated such buzz and drawn fans into their world, eagerly awaiting more. A perfect example of collaboration down to the creation of the work itself, the identical twin brothers paint side by side, embodying the carefree spirit of the city while honing in on shocking emotional depth. With so much commitment to the city and such an understanding of its cultural history, it makes perfect sense that Thinkspace and The Perez Brothers would come together once again, two LA mainstays working together to leave an imprint on the cityscape.

This show, which is the third solo show for The Perez Brothers and the second with the gallery, is deeply rooted in their shared heritage-Los Angeles, but there is also a deeper connection as both the gallery and the artists have long demonstrated their commitment to integrating lowbrow interest and more refined techniques for a beautiful and engaging juxtaposition.

The Perez Brothers were immersed in California lowrider culture from a very young age, constantly in awe of their father’s own collection and often invited to join him for a ride on the weekends. These experiences were formative for the brothers, taking the cars and surrounding culture from a simple hobby to a true passion that they carry with them.

The organic influence of their childhood is only improved by refined techniques they learned at Otis College of Art and Design. With Fine Art Degrees in hand, they came to realize there is power in collaboration and formed the duo we see before us today. Each painting embodies balance, balancing their styles, their heritage, and their influence for something truly magical. Their flow and comfortability with each other is evident in each work. Through the showcasing of Southern California lowrider culture, viewers catch a glimpse into the complexities that leave an emotional imprint through each generation, layering exciting subjects with nuanced sentimentality.

Community is an incredibly important part of this body of work, which is quite fitting for such a community-driven gallery. In each one of the new works, “the people are the most important part of the piece. They make the image.”This commitment is apparent, with the subjects effortless evoking emotion and provoking human connection.

The resulting show is a love letter to SoCal-the people, the weather, the whole vibe. With 6 works on canvas and 7 works on paper, the display is varied but the sentiment is constant.

This show takes full advantage of Thinkspace’s epic expansion, which now spans 8,500 square feet of exhibition spaces and 15,000 square feet of fully landscaped courtyard that connects the two spaces. It wouldn’t be Perez Brothers’ experience without lowriders, and luckily there is the perfect outdoor space for them, bringing new energy to the manicured area.

With a taco stand, light projections, a live painting by Angel Once, merchandise booths from local artisans and Timeless Vapes, this is an event you won’t want to miss.

The show opens August 6th with a reception from 6PM to 10PM. It will remain on view until August 27th at Thinkspace Projects.

About The Perez Brothers
The Perez Bros. eat, breath, photograph and paint lowrider car culture like no one else. Growing up in South Gate, California Alejandro and Vicente (Born 1994) were born into a family of motor-heads, so it was only a matter of time before the identical twins took to documenting customized vehicles and the homies who love them. Both attended Otis College of Art and Design to pursue degrees in Fine Art focusing on painting, which is when they started collaborating as an artistic duo. Their photographs, murals and paintings capture slices of SoCal life as only locals can.